My Kuala Lumpur Heritage Trail is a self-guided tour of the historic heart of KL, covering many famous colonial-era landmark buildings clustered in a compact area surrounding Merdeka Square.

You can easily see all the sites mentioned here within 2 to 3 hours. 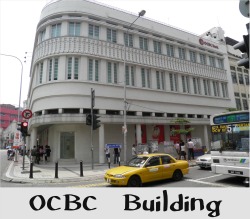 The suggested starting point for this Kuala Lumpur Heritage Trail is Central Market (which was the final stop on my previous tour - see Chinatown Walking Tour).

Make your way from Central Market to Lebuh Pasar Besar (Old Market Square). This square was once the commercial heart of Kuala Lumpur with the main branch of Hongkong and Shanghai Bank at one end of the square and Mercantile Bank at the other end surrounded by the offices of many of their major customers.

HSBC is still there but their rather grand building was replaced by a bland modern tower in the 1970s.

The main highlight for Kuala Lumpur Heritage Trail enthusiasts is the OCBC Building. This was designed in 1938 in Art Deco style for the Overseas Chinese Banking Corporation by AO Coltman. It included underground parking for bicycles. 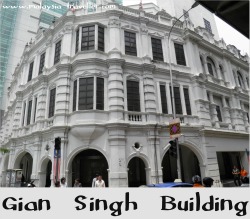 At the centre of the square on what was once a busy market stands the Clock Tower, built to commemorate the coronation of King George VI in 1937. It may have looked imposing at the time with its Art Deco motifs but today it seems rather lost and forlorn amid the bus stands and coin-operated public toilets.

Time to move on.

Continue our Kuala Lumpur Heritage Trail along Lebuh Ampang and you will see the white coloured Gian Singh Building on the corner with Jalan Tun Perak. This was constructed in 1909 on behalf of various owners each according to their individual designs but with a common facade and roofline. The whole block was occupied by Gian Singh, a textile trading company (which still exists), from the 1920s onwards. 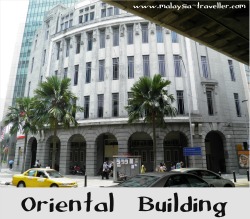 On a nearby corner is the Oriental Building (also known as the Bank Bumiputra Building), designed in 1930, again by architect AO Coltman, to house Radio Malaya. Some say the design looks like a 1930s-era radio. I could not make out if the building is occupied at present. 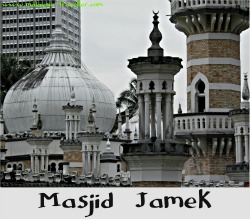 Across the street is the entrance to the Masjid Jamek (Jamek Mosque). This was the first brick built mosque in KL, designed in 1907 in Mogul style by A.B Hubback, who also designed many of KL's other famous landmarks from that era. The mosque is sited where KL's history began, at the confluence of the Klang and Gombak rivers, the muddy estuaries which gave Kuala Lumpur its name. The mosque's compound contains a number of coconut palms which help to retain a rural atmosphere in the heart of busy KL. Non Muslims are welcome to visit outside of prayer times (between 9am and 11am is a good time to visit except on Fridays). 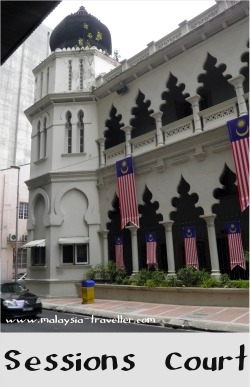 Next door is the Sessions and Magistrates Court, the first of a row of former court and government buildings which line Merdeka Square. This grand building, formerly known as the Federated Malay States Survey Office, dates from 1910 and boasts onion shaped domes and cinque-foil arches. Some of the domes appear to have weeds sprouting out of them which illustrates the difficulty of maintaining these heritage buildings given Malaysia's corrosive weather conditions. 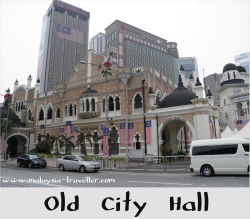 Next on our Kuala Lumpur Heritage Trail comes the former City Hall, now named Panggung Bandaraya (City Theatre), a slightly older building designed by AB Hubback in 1896. The interior was destroyed by fire in 1992 but since restored and updated. It is the venue for the Kuala Lumpur International Short Film Festival in 2012. 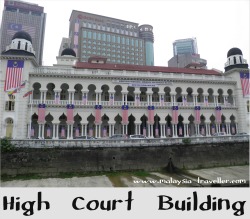 The neighbouring building is the former High Court built in 1909 and designed by A.C. Norman. It now appears to be used by the Ministry of Information, Communications and Culture. 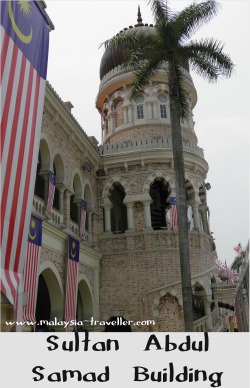 Continuing along the edge of Merdeka Square on Jalan Raja Laut you will pass the Sultan Abdul Samad Building, the best known symbol of Malaysia until the Petronas Towers were built and still today one of the most photographed buildings in Malaysia. Built between 1894 and 1897 it was designed by A.C. Norman and R.A.J. Bidwell in Mogul architectural style and features copper domes and a 40m high clock tower. The building was named after the then Sultan of Selangor and over its lifetime it has served as government offices and as a High Court and Supreme Court. Today, like its neighbouring buildings, it is occupied by the Ministry of Information, Communications and Culture. While the architectural style is not particularly Malaysian and would look more at home in India, it has come to symbolize Malaysia and has played an important role in the country's history. 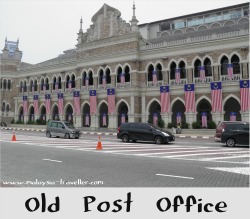 Next door is the Old General Post Office, another Hubback creation, dating from 1896 and built in similar style to the Sultan Abdul Samad building. The post office was relocated to a modern building in 1984. 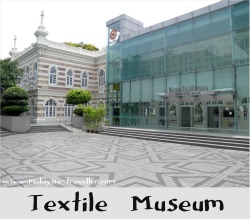 Completing this row of colonial relics is the National Textile Museum housed in an elegant and historic Mogul style building. Originally built in 1896 (architect A.B. Hubback) to house the headquarters of the Federated Malay States Railways it was later used by various government departments before being refurbished as a museum in 2007. Now I have to confess that a textile museum did not sound that exciting to me but I gave it a try and it was quite interesting to see how batik is made, to learn about woodblock printing techniques and to see samples of fabric made from pineapple fibre. It was also an opportunity to cool off in the air-conditioned galleries and to use the toilet. Admission is free. Open daily from 9am to 6pm. 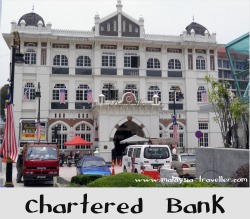 Across the street is the old Chartered Bank building, built in 1919. In recent years the building has served as a National History Museum, then a restaurant and is now the Music Museum. The most famous story about this bank concerns the floods of 1926 during which the basement of the building was submerged. When the floods subsided the bank had to dry out their vault contents and millions of dollars worth of banknotes were spread out on the cricket pitch in front of the bank to dry in the sun. 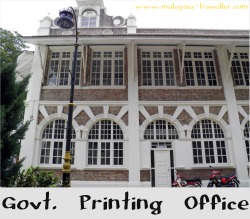 Next stop on our Kuala Lumpur Heritage Trail, next door to the bank, is the former Government Printing Office, a lovely Mogul style building built by A.C. Norman in 1899. It was used as a Memorial Library for some years but is now converted into the Kuala Lumpur City Gallery. Also in this corner of Merdeka Square is the Queen Victoria Fountain which you can read about on my blog. 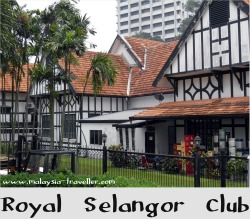 Facing the Sultan Abdul Samad building is the prestigious Royal Selangor Club, founded in 1884. The clubhouse was known as the Spotted Dog during colonial times when Dataran Merdeka was called the 'padang' and used for cricket and other sports. The current building was built after the earlier one burnt down in 1970. 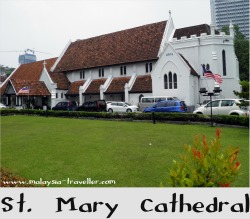 Nearby is the Cathedral of Saint Mary The Virgin, built in 1894 in English Gothic style. 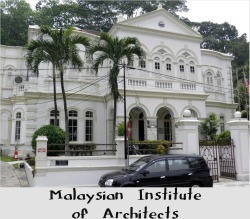 Ducking under the flyover behind the church brings us to Jalan Tangsi where the offices of the Malaysian Institute of Architects (PAM) are located, housed in one of the finest old buildings in Kuala Lumpur. It was built in 1907 as a town house for Loke Chow Kit and named Loke Hall. It was thought to be designed by an Anglo-Indian architect, A.K. Musdeen. In 1909, the building became the Empire Hotel and in 1919 it changed to the Peninsula Hotel which it remained until PAM acquired the premises in 1973. There is a small restaurant in the courtyard area where you can take refreshment after your long walk and appreciate this highlight of the Kuala Lumpur Heritage Trail. 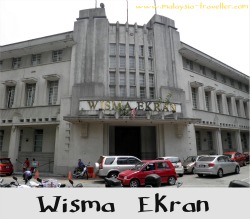 Next door to the PAM building is the Wisma Ekran. This building formerly housed the head office of Anglo Oriental, a mining company. Also designed by A.O. Coltman, this is another fine example of the Eclectic Art Deco style. 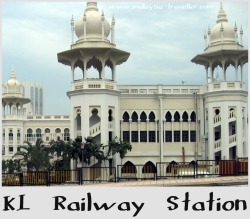 That completes the Kuala Lumpur Heritage Trail but if you would like to add on an extension you could walk to the famous old KL Railway Station, another Hubback masterpiece dating from 1904 and surely one of most striking railway stations anywhere. See the map for directions but be warned, access to the station requires crossing some very busy roads which are not pedestrian-friendly so take care. The best way to visit the station is by train or take a taxi.