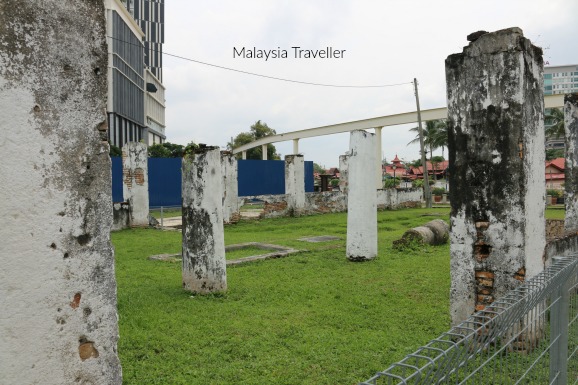 The ruins of Ermida de Rosario, or what is left of them, are located on the banks of the River Melaka, facing Kampung Morten. They are in a sorry state, having been unprotected and allowed to deteriorate for nearly two centuries. At least now there is a wire fence around the ruins of this former Portuguese chapel and a sign put up by Perzim Melaka so that they can longer be used as a rubbish dump or truck parking lot.

During the Portuguese occupation of Malacca (from 1511 to 1641) there were 14 Catholic churches and 2 chapels serving the town’s Christian population of 7,400. One of these was the Church of São Lourenço (St. Lawrence) which was built on this site in 1549. At that time the suburb was known as Suppa and is now called Bunga Raya.

In 1641 Malacca fell to the Dutch who, being predominantly Protestant and, at that time, anti-Catholic, set about demolishing Portuguese churches and persecuting the Catholic population of the city. São Lourenço Church was burnt down but a chapel, Ermida de Rosario, was built in its place. This in turn, fell into disrepair in the 1800s as worshippers preferred to attend nearby St. Peter’s Church which was built in 1710. 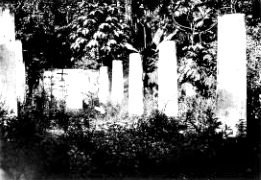 There is a forgotten book called Historical Tombstones of Malacca written by Robert Norman Bland in 1905. He went round churchyards in Malacca and photographed most of Portuguese and Dutch memorial stones he could find at that time. His photo of Ermida de Rosario (above) showed that, even in 1905, the ruins were already in a bad state with no roof or walls and just a dozen pillars and the remains of an altar left standing.

The only tombstone he photographed here was of an Armenian man called Tarkan, son of Ovanjan, who died on 8th January 1746. This tombstone is no longer visible, either it has since been removed or it toppled over and now lies buried under the grass. 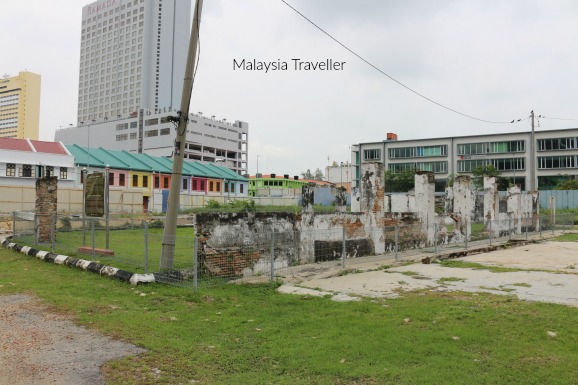 I visited the ruins of Ermida de Rosario in July 2017. The site has been surrounded by a wire fence and an information board put up to explain some of the background. 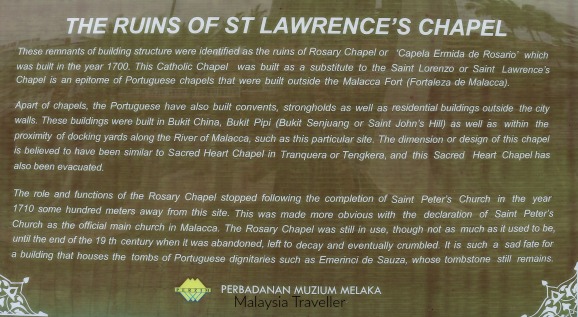 The information board says that the dimensions and design of the chapel is believed to be similar to the Sacred Heart Chapel in Jalan Tengkera, Melaka. 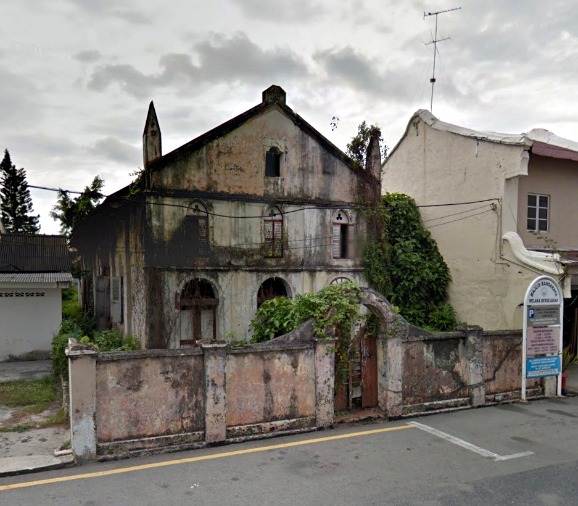 The Sacred Heart Chapel in Jalan Tengkera is also abandoned and in need of some restoration if it is to avoid the same fate as Ermida de Rosario. 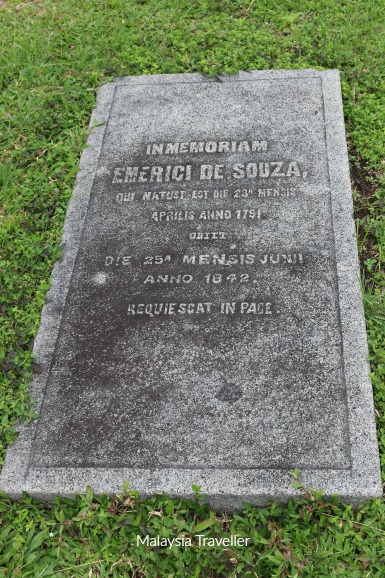 The fence prevents people from entering the site but if anyone were to enter they would see this headstone, inscribed in Latin, for Emerici De Sousa who died in 1842 by which time the chapel had already fallen into disuse. It is unclear why the author of Historical Tombstones of Malacca appears to have missed this one. 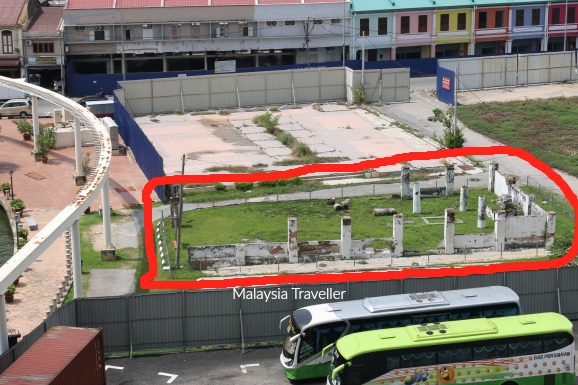 What will become of this site? By erecting the wire fence and the signboard Perbadanan Muzium Melaka appears to be acknowledging that this historical site is worth preserving. However the ruins are surrounded by a large cleared site, once occupied by the old Federal Cinema and a food court so it appears it is earmarked for development. No doubt the owners would like to build a high-rise apartment or hotel complex but that would be a bit tricky with a ruined chapel in the middle of the site. Perhaps instead of preserving it in its rather ugly present condition, the owners could faithfully recreate an accurate replica of the original exterior and incorporate it into their plans. Perhaps it could be used as a wedding chapel for Chinese tourists.

Either that, or the whole area should be converted into a park (Melaka is short of green spaces) with the ruins allowed to continue their gentle decay into the landscape.

How to Get to the Ruins of Ermida de Rosario

I have marked the exact location of the ruins of Ermida de Rosario on this map: