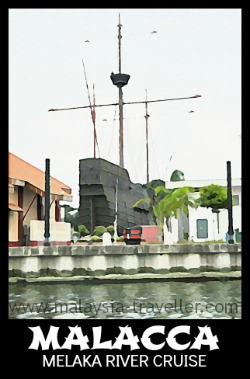 The Melaka River Cruise is a great way to see the sights of Melaka at a leisurely pace, in comfort and without breaking the bank.

The Melaka River is where the town began and it has played a key role in Melaka's colourful history. Taking a river cruise is like seeing Melaka from the back door.

A few decades ago the river was a stinking waterway lined with decaying houses on stilts and the untidy rear side of crumbling shophouses.

In recent years it has had a major facelift. Yes, there has been a lot of new development but at the same time an effort has been made to preserve many of the historic buildings and bridges along the river.

Even the newer buildings have been painted with colourful murals depicting different aspects of Malacca's rich history and culture.

There are now three jetties, one at each end of the route and one at The Shore. You can begin the cruise from any jetty:

Although I saw some posters advertising a hop-on, hop-off route, that option does not appear to be available at present and you can only do a round trip with no disembarking en-route. That's a pity.

If you are driving to Melaka you will discover that finding a parking space in the town centre is not easy. If you just want to do the river cruise I would suggest you catch the boat at Taman Rempah jetty because they have a large car park and it's free of charge.  Alternatively you can park at The Shore and board the river cruise here.

I have marked the three locations mentioned above on this map: 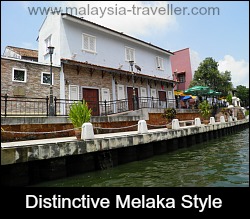 Prices as at January 2022 are as follows:

Get an 8% discount, save queuing and avoid disappointment by buying  online through Tripcarte's secure website with instant ticketing, fully refundable and hassle free e-tickets.

The Shore Jetty counter hours are 10 am - 10 pm. The first boat departs at 11 am and the last boat is at 10 pm (must buy last boat tickets before 9.30pm. Boats from The Shore Jetty depart every hour on the hour.

Which is the better time to go, by day or by night? At night many of the sights alongside the river are illuminated with colourful lights. But on the other hand, during the day you will get a better view of the murals and other details. You are also more likely to spot one of the monitor lizards which frequent the river bank. Perhaps you should go at sunset so that you can see both day and night.

If you want to arrange a group outing or corporate event you can charter the whole 40 seat boat for RM 1,000.

For more details you can call the Melaka River Cruise company on 06 281 4322/23 during office hours. 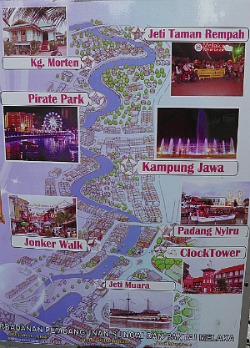 From whichever jetty you commence your Melaka River Cruise, the boat will pass near the following landmarks: 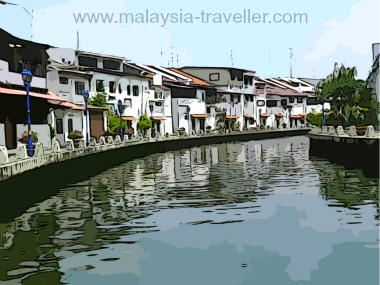