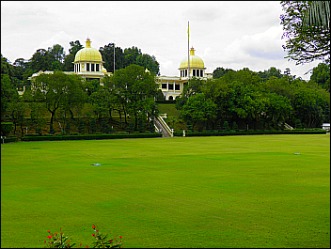 The old palace ceased to be the official residence on 15th November 2011 following completion of a new palace complex at Jalan Duta.

The old Istana Negara has now been converted to a museum and is open to the public.

History of the Palace

The National Palace is located on an 11 hectare site in the leafy centre of Kuala Lumpur. It was built in 1928 as a private residence for a Chinese tin tycoon called Chan Wing who made his fortune by developing the Hong Fatt Tin Mine which is where The Mines development now stands.

Mr. Chan Wing's home cost RM150,000 to build and although it had 13 rooms at that time it must still have been quite crowded as he had 26 children and 8 or 9 wives.

He had to flee Malaya during the Japanese occupation as he was known to be a supporter of anti-Japanese resistance in China. His descendants still have active business interests in Malaysia and beyond.

During the War, the Japanese used the building as an officers' mess. After their surrender, it was used by the British Royal Air Force for a while and then served as a temporary Palace for the Sultan of Selangor while his new Palace at Klang was being built.

The Palace was then acquired by the Federal Government in 1957 and, after undergoing extensive renovations and extensions, it became the National Palace.

Malaysia has a unique constitutional monarchy system whereby the King, who is also Ruler of one of the states that make up Malaysia, serves for a fixed period of 5 years before being replaced by a Sultan from another of the states. The King is elected by the Conference of Rulers and in practice the Monarchy has rotated in turn between each of the 9 states with Sultans.

The remaining 4 of Malaysia's 13 states (Sarawak, Sabah, Melaka and Penang do not have Sultans - they have Governors instead).

The King, as Supreme Head of State, has roles and functions in matters relating to legislation, judiciary, military, religion, diplomacy and pardoning.

If you are ever fortunate enough to be invited to the Palace for dinner you will need to brush up on your etiquette. I used to recommend a fascinating official website on the Malaysian Monarchy (unfortunately no longer available) which told you everything you needed to know. For example, it said us that at the dinner table we should "Avoid yawning or belching loudly". I should think so too!

And if you are ever hosting a function for VVIPs you will need to know the Federal Order of Precedence to avoid offending anybody. The same website informs us that naturally the King and Queen occupy the number 1 and 2 positions in the order of precedence. The Prime Minister only comes in at number 6. When planning your seating arrangements you might also need to know for example that the Governor of the Central Bank (No.40) takes precedence over the Mayor of Kuala Lumpur (No.41). 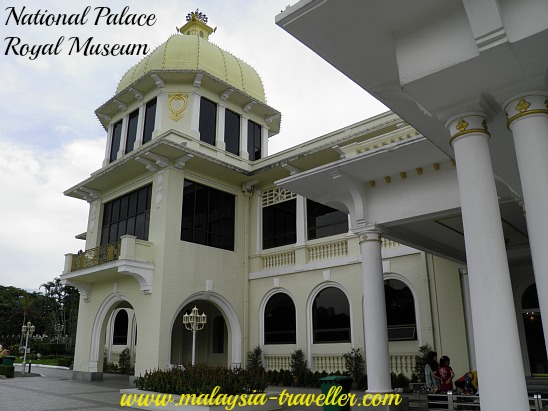 It is interesting to be able to wander round a palace which until very recently was occupied by the King and Queen. The official reception rooms are, as you might imagine, elaborately furnished with extravagent use of yellow,the royal colour,and plenty of gold leaf.

The private apartments and bedrooms are more simply furnished and you get the impression that perhaps the best items of furniture were transferred to the new palace, leaving the second best items behind in the museum.

The palace also lacks the personal possessions of the royal families who once occupied it and for that reason I think there are better royal museums in Malaysia such as the Royal Gallery in Klang,  or the Galeri Sultan Azlan Shah in Kuala Kangsar.

Still this Royal Museum is well worth a visit.

Open daily from 9am to 5pm.

How to Get to the National Palace

The location is marked on my Top KL Attractions page. The palace is surrounded by busy highways so you really have to arrive by car, taxi or tour bus.

To see some photos of the new Istana Negara take a look at this post on my blog.