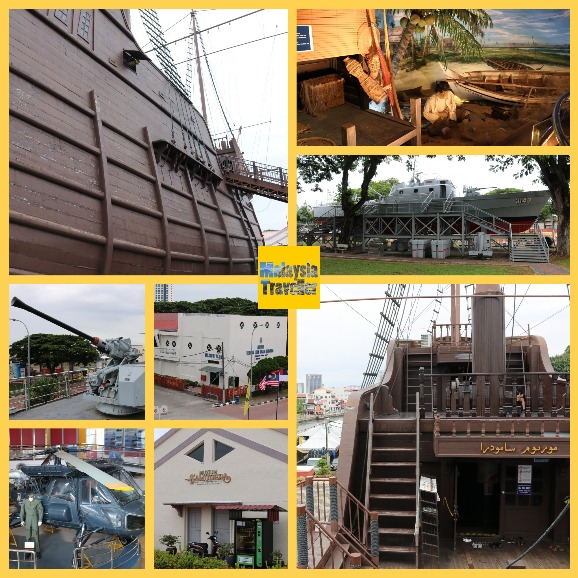 At Melaka Maritime Museum you get three museums for the price of one.

The main attraction is a full sized replica of Flor De La Mar*, a treasure-laden 16th century Portuguese galleon which sank during a storm in 1511 somewhere in the Straits of Malacca. The wreck and its lost treasure are believed to lie off the coast of Sumatra, waiting to be discovered, though some claim she has already been found and the contents secretly salvaged.

The replica is quite nicely done. It is not meant to be an authentic copy of the original. The exterior is made of concrete and while the wooden interior and decks add a degree of realism, it is designed to be a museum rather than a working carrack, as this type of vessel was called. The exhibits include information on Portuguese exploration and conquests in the Indian Ocean, background to Panglima Awang (the ‘Malay Magellan’) and similar topics.

After viewing the Flor De La Mar, visitors enter Muzium Samudera (phase 2) which is housed in a former godown belonging to Guthrie, a trading and plantation company which is now part of Sime Darby. The concept of this two storey museum building is “Ocean and Mankind’. Its exhibits include  model fishing boats, dioramas of fishing villages, displays on marine creatures and birds and so on.

Finally visitors can cross the road to the Royal Malaysian Navy Museum. The indoor exhibits include a WASP MK1 helicopter, some naval guns and equipment and information on the history of the RMN and the activities of the modern Navy. Outside are more naval guns and a decommissioned patrol boat displayed on stilts. You can climb onto its deck but cannot go inside.

* You can read more about the colourful history of the Flor de la Mar on my blog.

Opening Hours and Admission Fee
(As At April 2018)

This museum is worth seeing, particularly the Flor de la Mar replica. The Phase 2 building is not so interesting and the Royal Malaysian Navy Museum could be better, when compared to the RMAF and Army museums which are both very good.

How to Get to the Melaka Maritime Museum

The exact location is shown on this map.