I like Kuala Terengganu. The city has a relaxed feel to it and an attractive seaside setting and it is more geared up for tourism than some other Malaysian cities where you cannot even buy a postcard.

The main tourist attractions are in a compact corner of town and suitable for covering on foot using this self-guided tour and map.

Use the map's zoom and pan buttons to get a clearer view. (By the way these Google Maps are not infallible. I notice some of the hotel locations on this map are not correct - in fact two of the hotels shown are actually in Redang Island, about 50km away! My markers are in the correct places however.)

The sites with the yellow markers are those included on this walking tourist trail. You will need some transportation to reach those places with the red and green markers.

The walking route is only 2km long and a good place to start is at the dazzling white Abidin Mosque. 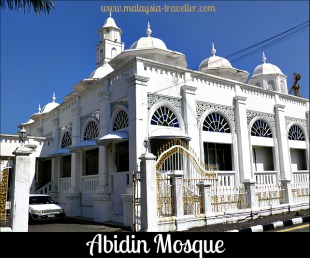 The original wooden mosque on this site was built by Sultan Zainal Abidin II and was completed in 1808. Since then it has been rebuilt in brick and refurbished and expanded a number of times. Its most striking feature is a 7 storey minaret. Some former Sultans are buried in the adjoining Old Royal Mausoleum. 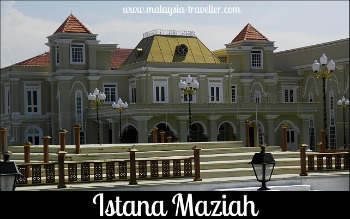 Close by is the Maziah Palace (Istana Maziah) which was built between around 1897 and 1903 as a residence and reception venue for the Terengganu royal family.

It too has been remodelled a number of times, most recently by the addition of the two towers flanking the main entrance which have given it a kind of theme park look.

This palace is not normally open to the public but you can visit the mini-park in front. 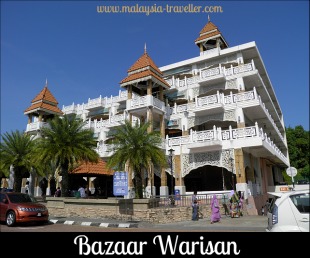 Next turn left onto Jalan Sultan Zainal Abidin and follow it until you find the Tourist Information Office where you can obtain lots of information on hotels, resorts and places to go in the state of Terengganu. Next door is the Bazaar Warisan, a newly built shopping development containing shops selling souvenirs, gifts, batik and so on. 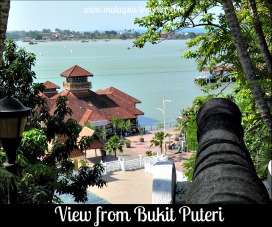 Take the escalators (if they are working) up to the roof level and cross over onto Princess Hill Fort (Bukit Puteri).

This 200m high hill has a fort at its summit which was built in the 1830s and served as a defensive position during the civil wars between rival sultans vying for the Terengganu throne.

The fort contains a 10m high lighthouse and a cement roofed stage in the shape of a throne. A few cannons line the ramparts although most of the cannons were removed by the Japanese during WWII.

The photo looks out towards the rustic fishing village of Seberang Takir. It is possible to take a boat to the village from the jetty in front of the Tourist Office if you want to take a look. 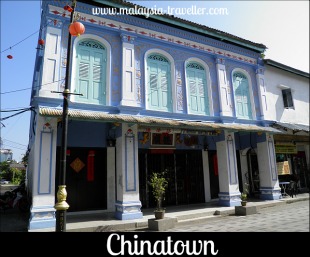 Next we move on to the Central Market (Pasar Payang) where traditional items like batik and silk are sold as well as fruit, vegetables and cooked food products such as the local delicacy Keropok Lekor, made from fish and sago.

Turning into Jalan Kampung Cina we arrive at the Chinatown area, probably the cleanest and neatest Chinatown that I have seen in Malaysia.

The streets and pavements have been paved with coloured bricks. Even the side alleys have been given a facelift with murals and plaques adding to the heritage of this area. Shophouses have been restored and carefully painted.

All that is missing are the boutique hotels of the sort you find in Penang or Melaka. Not that there are many foreign tourists to stay in them! 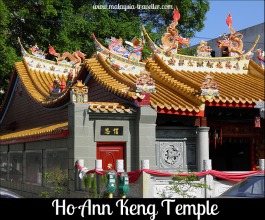 On this street is the Ho Ann Kiong Temple. During the years 1796-1821 this temple was built by immigrants from the Hokkien Province of China. It was rebuilt in 1915 in an effort to stave off an unknown disease which was ravaging the local population. After the temple was rebuilt the disease disappeared.

It has been renovated twice since then and today looks immaculate with its new carved stone cladding.

At the end of Jalan Kampung China sits the Hotel Seri Malaysia Kuala Terengganu, one of the smartest looking hotels in the city centre. 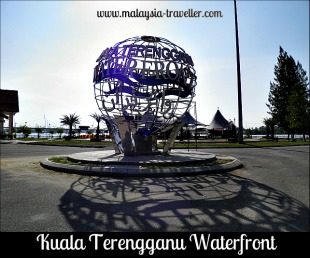 On a small hill opposite is the Royal Mausoleum said to contain impressive headstones imported from Acheh in Sumatra but it seems to be padlocked most of the time. Continuing along next to the river, there has been a lot of land reclamation going on which is being landscaped and transformed into a new Waterfront area which will no doubt add to the city's attractions in due course.