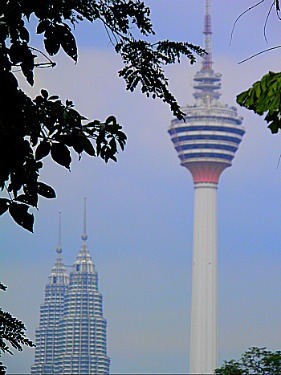 KL Tower is the 7th tallest telecommunications tower in the world with a height of 421m (it dropped one place in the rankings following the opening of Tokyo Skytree in 2012).

Its Observation Deck is at a less impressive 276m, being situated on the lowest of the six levels in the head of the tower, but as the tower stands on top of a small hill, it still gives excellent views of Kuala Lumpur and the surrounding regions. Above the observation deck is the Sky Deck at 300 metres above ground level.

KL Tower's views are more spectacular than those from the Skybridge at Petronas Twin Towers but recently Petronas has opened a new viewing deck over 80 floors up so it may have taken over the number one spot for views.

KL Tower was opened to the public in 1996, nearly 5 years after construction started. It offers the same sort of visitor experience as similar towers in Seoul and Auckland which I have also visited.

The management of the KL version (it is owned by Telecom Malaysia) has done its best to maximise the Tower's tourism potential (and revenue!) by creating some add-on attractions. These are:

A a 6D motion simulated thrill ride for ages 6 and above.

Colourful clown fish, sharks and other tropical sea creatures are on display in this coral-filled aquarium.

The Tower is located within Bukit Nanas Forest Reserve, a micro-sized rain forest in the heart of the city. It was actually gazetted as a forest reserve in 1906 meaning that it has plenty of old and large trees along its well laid-out nature trails. It is a fun place to explore for adults and kids and there is an outdoor exercise area. Entrance is free and you can even make use of a complimentary guide if you want (not that you could get seriously lost but the guide can point out animal and plant life that you might otherwise overlook.)

This is the first upside house attraction in KL although there are others in Melaka, Port Dickson and Sabah. Popular place for those social media photos.

On my three visits to the KL Tower I have not yet tried the Cultural Village. It seems very touristy and a bit artificial to recreate a traditional Malaysian kampung on the roof of a multi-storey car park. But it has been done well and if you are on a short trip to KL and want to absorb as much culture as possible then give it a go.

My kids did make me go here. It is a small enclosure with an albino python and other snakes, parrots, monkeys, rabbits, spiders and so on. The entrance fee can be included with the Tower entrance ticket depending on which ticket package you opt for.

For the really adventurous, the Tower is the venue for a base-jump event held every year or so (base-jumping is where people leap off the tops of tall buildings with a parachute). If this crazy activity is your cup of tea you can refer to the organizers' website for details.

This is another annual extreme event held at the Tower where thousands of contestants run up 2058 steps to the top of the tower for pride and certificates.

One floor above the Observation Deck is a Revolving Restaurant called Atmosphere360. I took my wife and some visitors there for dinner one evening. It was not cheap but the ticket included a visit to the Observation Deck. While the night view is impressive (especially the view of the spectacular Petronas Twin Towers) I think there is more to see in the daytime. Also bear in mind that if it is cloudy or raining (which happens often) there will be nothing to see at night.

There is also an Indian restaurant called Moghul Mahal which I have not tried yet and a pizza restaurant. 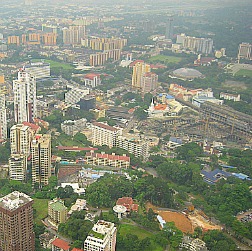 Prices are similar to last year. You can either buy combo packages of two or more attractions or buy single tickets for each attraction with prices as follows:

Similar combo tickets are available with admission to Sky Deck instead of Observation Deck. Check their official website for details.

Child rates apply for kids aged 4-11. Family packages for 2 adults + 2 children are available and can save you money.

Discounts are available for holders of KOMUTER LINK CARDS.

The Observation Deck and other facilities are open from 9am to 10pm every day of the year.

How to Get To Menara Kuala Lumpur

The location is marked on the map on my Top KL Attractions page.