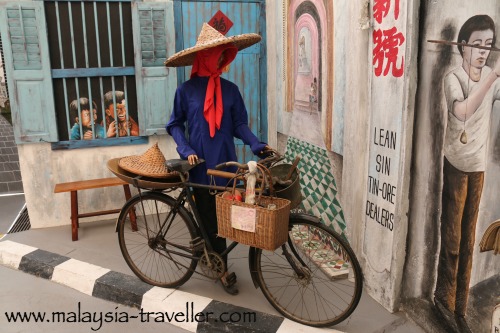 It provides an insight into the shadowy goings-on at the tin miners’ club where prostitution, gambling, opium smoking and triad activities were carried out behind the elegant facade of the club. The exhibition also tells the story of the Hakka people and gives an explanation of the tin mining industry.

I had the opportunity to visit in February 2015. Here is my review. 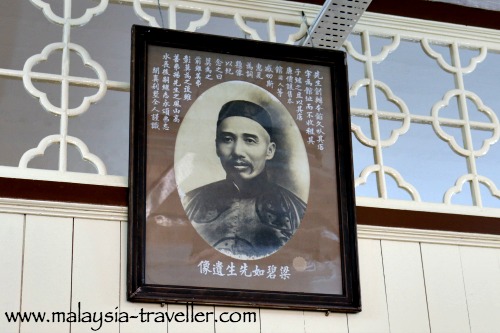 This charismatic portrait is of Leong Fee who was born in Guangdong Province, China in 1857. He arrived in Penang as a penniless migrant in 1876. With good luck and hard work he soon had fingers in many pies but it was in tin mining that he had his greatest success. He founded the Han Chin Tin Miners’ Club in a shophouse at No. 3 Treacher Street (now Jalan Bijeh Timah) where the Villa stands today. The Club was a place where Hakka miners, who were the only ones allowed in, could let off steam after a hard day in the tin mines. When Leong Fee died in 1912 he left behind 4 wives, several concubines (mistresses) and numerous broken hearted “dancing girls” who were employed in this club and similar establishments. 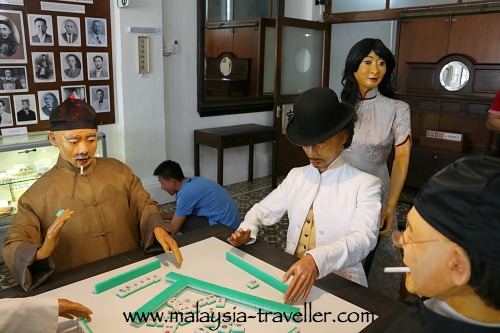 In 1927, the club bought the villa from Leong’s son and in 1929 rebuilt it into the fine building which it is today. The club continued for many decades but with the decline of the tin industry its membership dwindled and the building fell into semi-disrepair. In 2013 it was leased out to Ipoh World, a non-profit organisation focussed on preserving Perak’s rich heritage. Ipoh World has done an excellent job in restoring the building to its former glory while freeing up space to serve as exhibition galleries.

When I first saw the building in 2011 it had ugly air-conditioning units and modified windows.By 2015, the facade had been restored to its original state.

A former bedroom has been converted into a cinema screening an 11 minute black and white documentary produced in Hollywood in the 1930s called ‘Tin From the Malayan Jungle’. It’s not an Oscar winner but it explains the various methods of tin mining and has pictures of a tin dredge in action.

These mining techniques are illustrated further with mural paintings, life-sized mannequins, and authentic tools and equipment from the period.

The rear courtyard of the club has been painted with murals depicting street scenes from the old days. 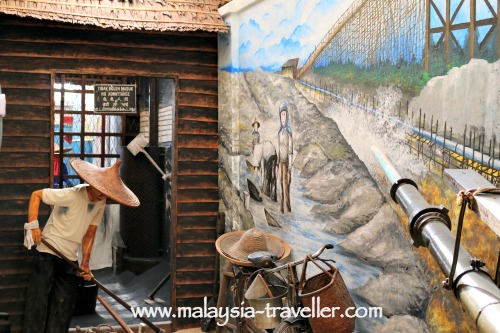 The 4 evils which tempted and tormented Hakka tin miners, both rich and poor, were Opium, Gambling, Prostitution and the Triads (secret societies). These are explained in some detail in the museum.

Needless to say, with all this monkey business going on, wives were not allowed inside the club. 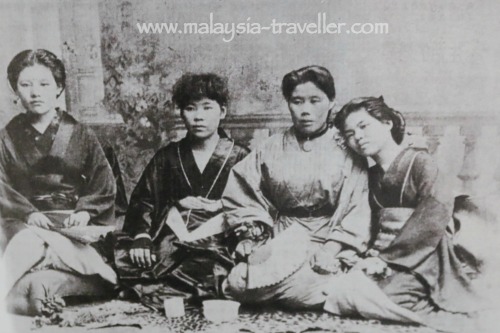 Old photo from the 1920s or 30s of four 'karayuki-san'. It is estimated that there were 50 Japanese prostitutes working in Ipoh in 1921. 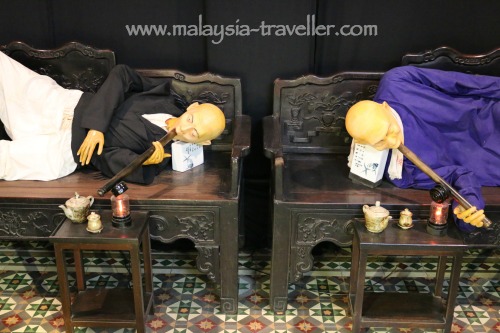 Opium smokers enjoying their habit. They rested their heads on ceramic pillows which were hollow for storing their valuables. The opium benches in the exhibition are beautifully carved.

On the top floor is a gallery dedicated to the history and background of the Hakkas and how they ended up in Malaysia. The Hakkas are described as ‘The Jews of Asia’ reflecting their history of mass migrations over the centuries as well as their pioneering spirit. 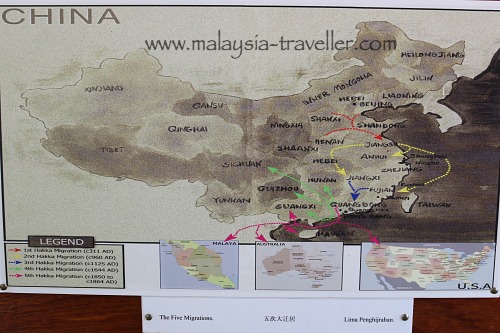 Ipoh World has fitted out Han Chin Pet Soo with a great collection of antique furniture, curiosities, collectables and genuine artefacts from the period. 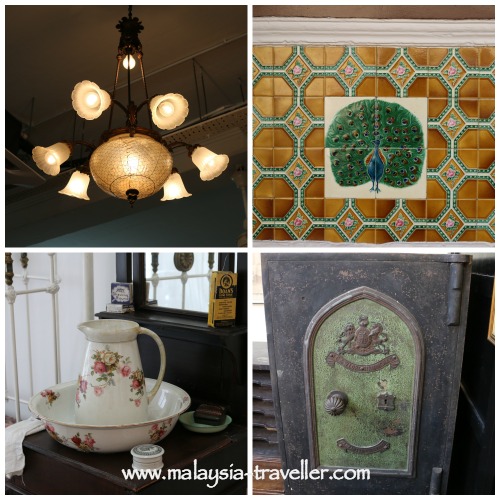 Top left: One of the first electric light fittings to be used in Ipoh is in the club.

Top right: The original tiles in the building's porch are still in excellent condition.

Bottom Left: In the days before en-suite bathrooms, jugs and bowls like these were used for washing.

It is rare to have the opportunity to go inside such a well preserved heritage building in Malaysia, especially one that has faithfully retained its original look and purpose.

This place should definitely be on your itinerary if you are visiting Ipoh.

If you want something special, the building can be booked for private functions, themed dinners, corporate events, wedding photos and so on. See contact details below. 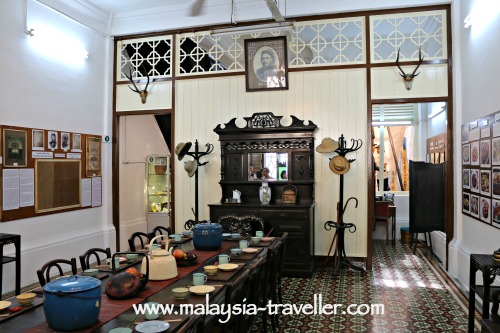 Entry is by appointment only.

There are four appointment slots daily from Tuesday to Sunday (closed every Monday).

It is easy to make an appointment through Ipoh World’s Automated Booking System.

Admission is FREE but donations are welcome (and necessary if the exhibition is to keep going for decades to come). 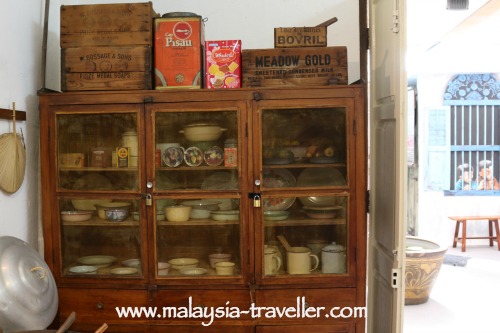 How to Han Chin Pet Soo

If you are travelling to Ipoh by train, Han Chin Pet Soo is about 10 minutes walk from Ipoh’s magnificent railway station via Jalan Dato Maharajalela and Jalan Panglima. See this map for directions to the location. 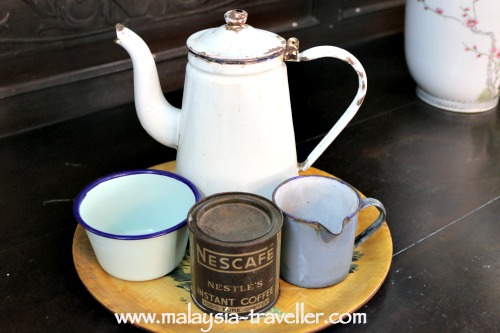 There are stacks of things to see in Ipoh, many of which are within walking distance.

See my Ipoh Heritage Walk for a suggested itinerary. 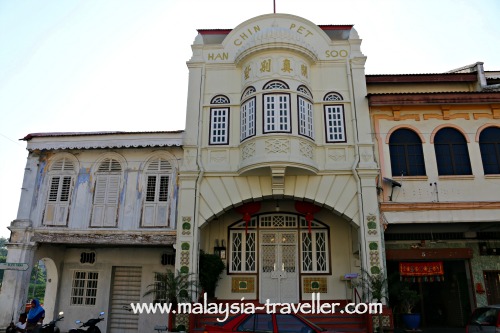