Fortress of Malacca
The Walls & Bastions 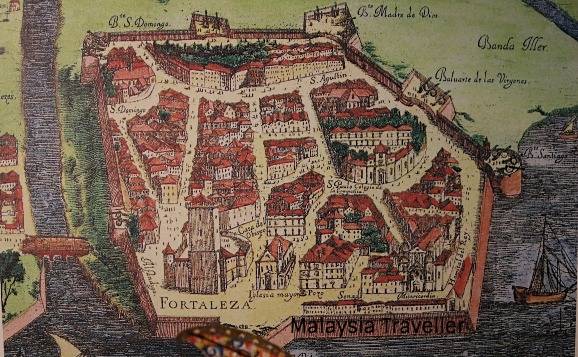 The historic Portuguese/Dutch Fortress of Malacca was destroyed by the British in 1807 but there are some remnants still visible and worth seeing. The most well known remain is A Famosa Gate but there are other sections of wall which have been excavated as well as a reconstructed bastion.

History of Fortress of Malacca

Since Malay Sultanate days there was always a fortified area surrounding a low hill (now called St Paul’s Hill) at the heart of Malacca where the Sultan resided.

After Portugal captured Malacca in 1511 they dismantled the Malay fortification and built a replacement called Fortaleza de Malacca (Fortress of Malacca). It was a solid construction with 8 defensive bulwarks and a perimeter of 1100 yards. It took 76 years to build from 1512 to 1588 and it enclosed a sizeable area containing the Governor’s residence, administration buildings, a hospital, barracks, churches and so on. 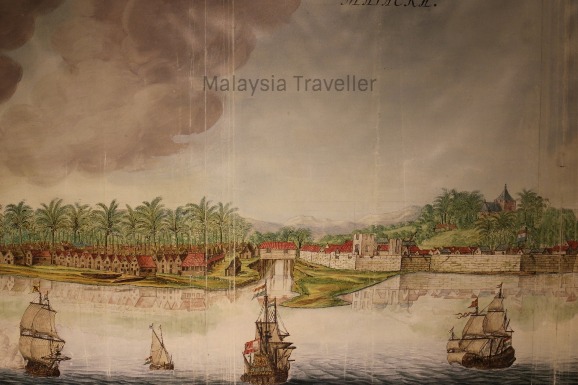 Model of Malacca during the Dutch period with St Paul's on the hill and Victoria Bastion in the foreground. You can make out the buildings of 'Dutch Square' in the middle right.

When the Dutch captured Malacca in 1641 they maintained the main layout of the fort but renamed the eight bastions and added a new bulwark called Middelburgh in 1660 and 1678, extending the perimeter to about 1400 yards. 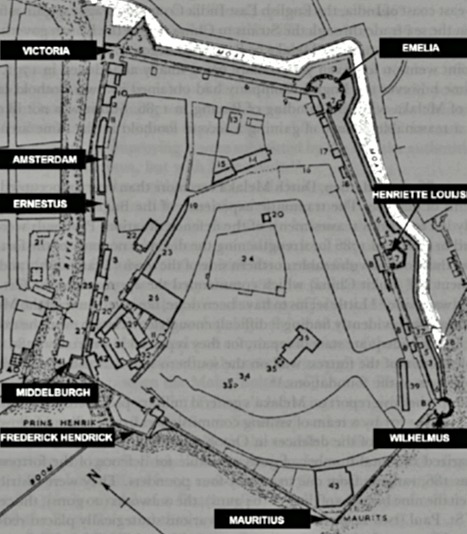 There were six small towers armed with cannons and a moat was constructed in 1674 to join up the river to the sea, thus making the fort an island. (The moat is no more, presumably filled in during British times, and land reclamations have pushed the sea far from where the walls once stood.) 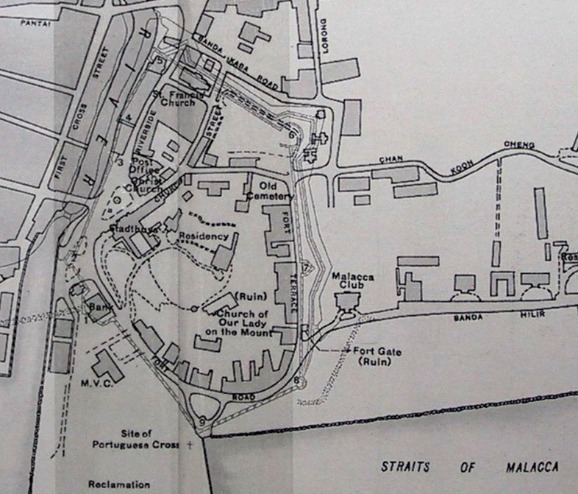 Map of Malacca in 1936 tracing out where the walls once stood.

When the British took over the administration of Malaya they decided they did not want Malacca to be the main trading centre anymore, preferring their newly expanded settlement of Penang. They also wanted to prevent Malacca from being a threat to British interests if it ever fell back into enemy hands. In a shocking act of vandalism they destroyed the fort in 1807 with the intention of abandoning Malacca thus forcing the residents of Malacca to evacuate and resettle in Penang. The plan failed when the residents refused to leave but by then the damage had been done. Malay writer Munshi Abdullah lamented that it was ‘a pity that a building as fine as this should be brought low in an instant of time … For the fort was the pride of Malacca and after its destruction the place lost its glory, like a woman bereaved of her husband, the lustre gone from her face.’

What Remains Of Fortress of Malacca Today 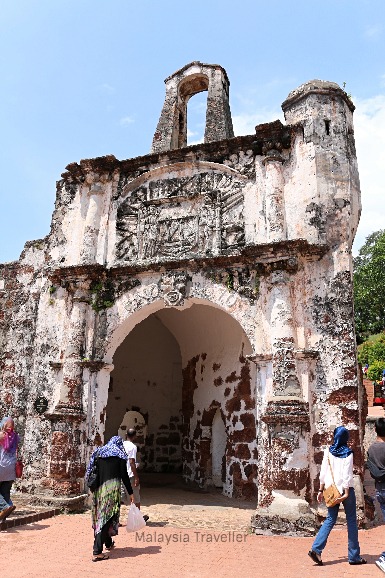 Porta de Santiago, often referred to as  A Famosa, is one of the old gates and the only part of the original fort left standing after the English demolition job. This gate was built by the Portuguese and damaged during the Dutch siege of the city in 1641. It was later renovated by the Dutch who added the inscription ‘Anno 1670’. 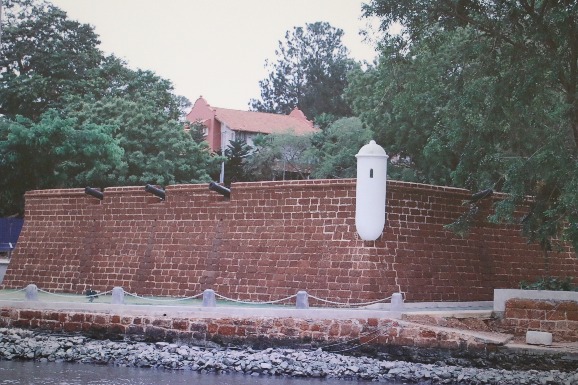 A replica of the Middelburgh Bastion was reconstructed in 2008 as a tourist attraction based on old paintings or drawings, but the scale might not be right since it appears to be smaller and less solid looking than I would have expected, compared to similar Dutch and Portuguese forts elsewhere in Asia. 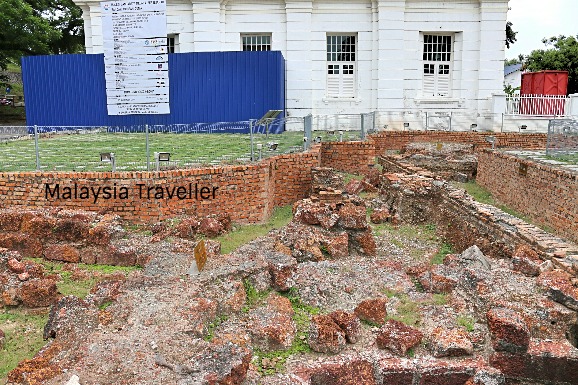 The base of another section of wall near Middelburgh Bastion has been unearthed and is on display next to the former Hongkong and Shanghai Banking Corporation building (the white building above). 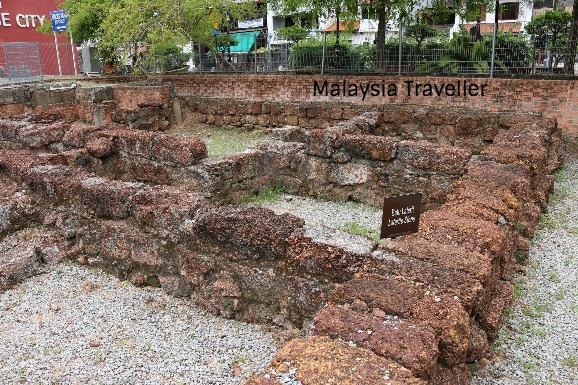 Victoria Bastion was called St. Domingo by the Portuguese and it was through here that the Dutch entered Malacca in their attack, destroying half of the bastion in the process. The Dutch rebuilt it and added a triangular extension (a ravelin) to strengthen the fortification. The foundations of this bastion were excavated in 2012 and can be seen next to the river opposite St Francis’ Church. The foundations are made of laterite stone. There are also the remains of two wells here. During the excavation fragments of Ming and Qing Dynasty porcelain were found as well as a 15 kg cannonball.

Part of the foundations of Wilhelmus Bastion (St. Lago to the Portuguese) can be found opposite the Malay and Islamic World Museum, Dunlop’s former Bastion House building. 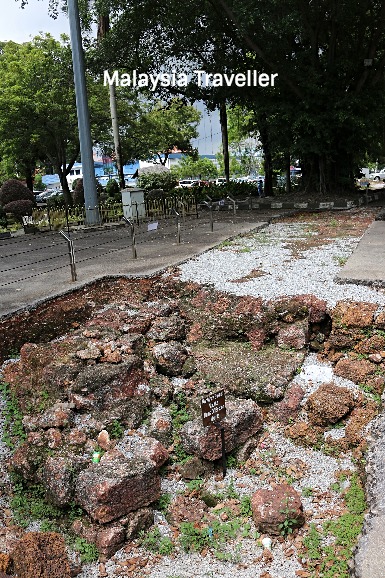 A small section of the foundations of the former Mauritius Bastion (above) can be seen in Taman Bunga Merdeka (Coronation Park) on Jalan Kota. The Portuguese called this bastion Hospital del Rey.

I am not aware that any other remains of the bastions or walls have survived but if there are any, please let me know.

Map of the Remains of Fortress of Malacca 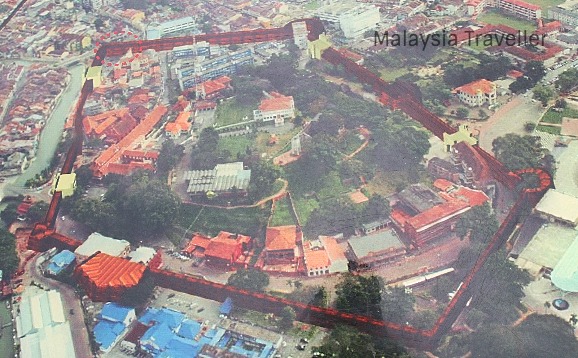 This photo shows where the walls stood superimposed on an aerial shot of modern Melaka.

And here is a map of the locations of the bastions mentioned above: