Eurasian is a term used for people of mixed race. With a colonial history dating back over 500 years there has been a fair amount of mingling between foreigners and locals. Portuguese, Dutch and British sounding surnames are not uncommon in Malaysia. The size of the population in Malaysia has been estimated at 29,000.

One prominent mixed race group is the Kristang community of mixed Portuguese and Malaccan descent who have their own language and customs, though much in decline. The Portuguese Settlement in Melaka is where you can find members of this community.

The Selangor Eurasian Association came into being on 14 December 1919 with the aim of looking after the social and economic welfare of the Eurasian community and to provide sports amenities.

A good place to find out more is the Eurasian Community Gallery at the People's Museum in Melaka. This is how the museum describes Eurasians:

It was in the sports arena that Eurasians could show their superiority. Very often they outshone their colonial masters. Thus they brought delight and pride to the locals. Eurasians also shone academically and professionally, in politics, music and arts. They were the backbone of the civil administration by producing the best teachers, clerical staff and trusted accountants.....   . They formed a small community yet providing the 'salt flavouring' to the whole. Undeniably the Eurasian community survives and grows. Many have migrated to other countries and settled down there."

There is a Christian cemetery in Loke Yew Road, Kuala Lumpur where a number of Eurasian graves can be found. I wrote about it on my blog. 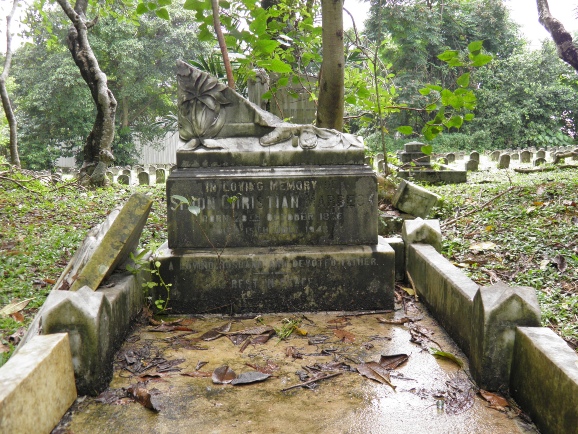 Grave at the Eurasian section of a cemetery in Loke Yew Road, Kuala Lumpur