When the designers of Putrajaya decided that they wanted to build the city around a man-made network of lakes, they realised that they would need an efficient filtering system to prevent the lakes from becoming polluted and stagnant. Rather than opt for an artificial filter they instead created a freshwater wetlands, said to be the largest one in the tropics.

Commenced in 1997, the wetlands project covered 197 hectares of what was once an oil palm plantation.

. Flood mitigation. It retains and stores storm water and spreads it out over a wide flat area.

. Water filtration. The intercepted urban run-off is filtered through a series of catchment cells, where marsh plants trap sediment and pollutants. Toxic substances such as pesticides, herbicides and metals are removed through complex bacterial and chemical processes. In this way you could say that the wetlands act as the kidneys of Putrajaya.

. Habitat creation. The resulting filtered water becomes a functioning wetland, providing a home to various plants and organisms which form the base of the food chain, sustaining a biodiversity of invertebrates, frogs, reptiles, fish and water birds.

The Nature Interpretation Centre is a mini-museum explaining how wetlands work and introducing the types of flora and fauna found in the park. If you go on a weekday you will probably have the place to yourself and indeed almost anytime park visitors are usually outnumbered by the gardening staff.

At the main Information Centre you can rent a bike or a set of binoculars or take a tram ride round the park. There is a small fee for these services - entrance to the park itself is free. 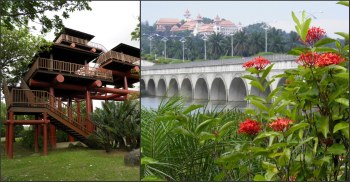 You should climb to the top of the look-out tower where you can get a good view of the whole area.

Nearby is the flamingo pond which has sheltered areas for picnics. 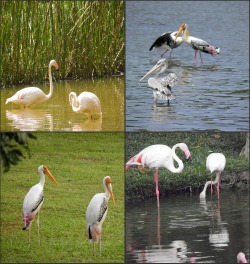 Be sure to take the tunnel underneath the road to the other side where there is a padang area. On my last visit this area had been hired out for a wedding (pity about the rain!). In fact you can even rent out the whole of Taman Wetlands if you need a big venue for a function. The cost is RM400 per hour on weekdays - pretty reasonable for 200 hectares!

Near the padang you will find a path through a bamboo forest where there is usually a troupe of shy monkeys swinging around. You can continue the path all the way back to the Nature Interpretation Centre.

The Water Recreation Centre is in a separate location (you need to cross the road bridge). Here there are kayaks, canoes, paddle boats and rowing boats for hire. You can also do fishing or have a BBQ (this is on the main lake, not the protected wetlands cells). 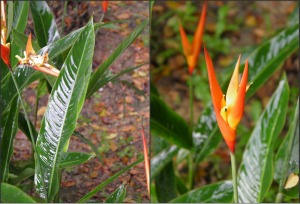 How to get to Taman Wetlands

From KL, Cityline bus no. 868 from in front of Sinar Kota near Puduraya stops directly at the entrance to Taman Wetlands.

There is plenty of free parking if you come by car.

There are seven hotels in the vicinity of Putrajaya and they are good ones too!

The first four are closest to Taman Wetlands.