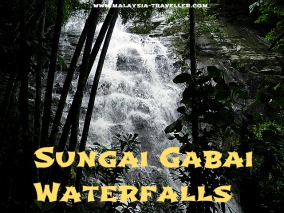 Sungai Gabai Waterfall is one of the closest waterfalls to Kuala Lumpur and it is easily accessible by car. This makes it extremely popular and it can get very crowded during weekends, public holidays and school holidays.

I went during a weekday and although there were a number of people enjoying the clear cool waters it was far from crowded.

On arrival you pass through an entrance archway and pay an entrance fee of RM1 per person.

The first cascade is just beyond the car park and it is possible to swim in natural pools.

A flight of concrete steps begins here. They are well made steps with non-slip edging and a hand rail. Altogether there are 333 steps if you want to go all the way up.

Along the way you pass a number of shelters and gazebos for picnics or resting. One or two of them appear somewhat dilapidated, possibly damaged by falling branches, but most are in good shape.

The second level of waterfall is an impressive near vertical drop. It had been raining heavily earlier on the day that we visited so the waterfalls were fast and furious.

At the top of the steps is a concrete bridge crossing the river to an upper level where there is a third, shorter cascade and some youths were sliding down it over the slippery rocks and into a gentle pool. It looked like fun!

There is a concrete shelter and people were barbecuing here.

These are a few of the photos I took at Sungai Gabai waterfall:

If you want to go further there is a rough path through the bamboo grove alongside the stream. There were quite a few leeches here though.

There was quite a lot of litter about but an employee was doing a good job in clearing up after the inconsiderate people who are too lazy to take their rubbish back with them.

There was also some graffiti on the rocks which spoils the look of the place.

Having said that I was quite impressed with this waterfall overall and it certainly makes a nice day out.

How to Get To Sungai Gabai Waterfall

Most people drive via Hulu Langat (Selangor), either taking the B62 from Ampang or the B52 from Cheras.

If it is not too far out of your way I prefer the B19 from Seminyih which takes you past the Sg. Telaka Recreational Park and the scenic Seminyih Reservoir.

Whichever route you take, head for Kampung Gabai on the B19 where you will see the signpost for the waterfalls. 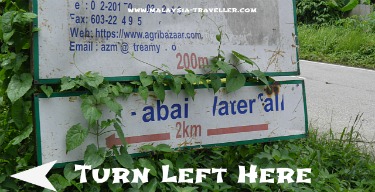