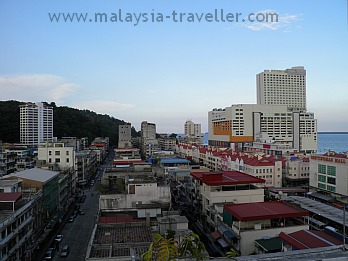 Welcome to my version of the Sandakan Heritage Trail.

Sandakan! Sandakan is one of those names, like Timbuktu or Kathmandu, that conjures up the romance of travel. It evokes images of impenetrable Borneo jungle, exotic birds, wild animals and colourful tribesmen.

The reality is somewhat different and many visitors to Sandakan probably come away disappointed.

It does not help that the old town of Sandakan was completely destroyed in WWII. Much of what was rebuilt following the war is ugly, drab or shabby. New suburbs and townships have mushroomed which no doubt have some attractions for the residents but little to lure the tourist.

But Sandakan is not without its charms. For a start, the town's beautiful setting: hemmed in by a ridge of green hills on one side and the blue/grey waters of the Sulu Sea on the other.

Sandakan Municipal Council, together with Sabah Tourism and Tourism Malaysia, has created a Sandakan Heritage Trail which covers most of the historical points of interest and sights around the city.

Maps like this are prominently displayed on billboards and posters at numerous points along the route: 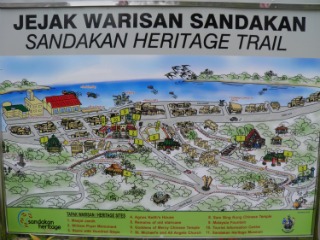 I followed this trail on my recent trip to Sandakan and, since the walk is only designed to take an hour, I added a number of extensions on to it which you can try if have the time and energy.

Here is my version of the Sandakan Heritage Trail:

The markers coloured in red on this map coincide with those attractions shown on the Municipal Council's Sandakan Heritage Trail map, those in yellow are optional extensions and those in blue are other points of reference in Sandakan.

We start our Sandakan Heritage Trail in front of the Masjid Jamek. A mosque has stood at this site for more than 100 years.

Proceeding westwards along Lebuh Empat we pass the Sandakan Hotel and the Police Station which is opposite an open square where various memorials are located including the William Pryer Monument, the Sandakan Liberation Monument and a memorial to a number of early explorers and pioneers who helped open up North Borneo. William Pryer was the founder of modern Sandakan in 1879. He cleared the bay of pirates and took the first steps to eliminate slavery which was rampant at the time.

Here too is the Heritage Museum (Muzium Warisan). There is not much to see inside but some of the old photographs of Sandakan are interesting. Downstairs there is currently an exhibition about Martin & Osa Johnson's North Borneo safari of the 1930s. This American couple liked to travel to far off and exotic countries and make books and films of their experiences. Since pictorial records from this period are rare, their material has become a valuable resource for researchers. Entrance to both the exhibition and museum are free.

Next to the police station is a modest sized High Court. Could this be the indication of a low crime rate in Sandakan? Perhaps not - I think I spotted a much larger modern court building in one of the newer suburbs of town.

Alongside the court building, a flight of 100 steps leads us up the hill. Now is the time to apply mosquito repellent if you have not already done so.

This pathway emerges onto Jalan Istana. Here you can turn right if you want to extend your walk by 1.7km to see the Chinese and Japanese Cemeteries, or turn left if you want to stick to the shorter Sandakan Heritage trail.

The latter brings us to the English Tea House and Restaurant, a pleasant spot to take refreshment, enjoy the views over the town or even play croquet on the immaculate lawn. The menu includes tea-time sets with cucumber sandwiches and scones, traditional English favourites like fish and chips or shepherds' pie, or popular Asian dishes.

The English Tea House is located next door to Agnes Keith's House which is one of the highlights of the tour. Agnes Newton Keith wrote her famous three-part autobiography, “The Land Below The Wind”, “Three Came Home” and “White Man Returns” about her experiences in Sandakan and the house plays a big role in her tales. The original house was destroyed during the war but was one of the first permanent timber structures to be rebuilt in 1947. It is now a museum and is a fascinating place to visit for anyone who is familiar with her books. If you have not yet read them you can find them on sale all over Sandakan. Entrance fee to the Museum is RM 2 for MyKad holders and RM 15 for foreigners. Kids under 12 are free.

After a few minutes walking we reach the next stop on the official Heritage Trail map, which is the remains of an old staircase which apparently once part of the Chinese Consulate before the War. Not terribly exciting!

If you like Chinese temples you can extend your tour from here, marked in yellow on the map, by walking to the Tam Kong Temple via Jalan Aman. It is a long way though - if you also want to see the Hindu Temple, Kuil Sri Sithi Vinayagar it will add 5km to your walk. I did it. Tam Kong is interesting because it is a temple within a temple (probably by building the new temple over the top of the old one). The Hindu Temple is fairly modest in appearance and there are better examples elsewhere.

Continuing on the red trail, we head downhill on Jalan Singapora and take a look at the Goddess of Mercy Chinese Temple (Tokong Kun Yam) which dates from the 1880s.

Next, just before the pedestrian bridge we turn right up a flight of steps which brings us out at St. Michael's and All Angels Church. St Michael’s is one of the very few buildings in all of Sabah to be made of stone. With its Gothic style architecture it looks as if it has been transplanted from an English village. The construction of the church, which took almost 20 years to complete, was begun in 1893, using ironwood, brick and then stone. During the wartime bombing of Sandakan, the church caught fire and only the stone walls remained. The church was rebuilt and today, remains one of Sandakan’s most attractive monuments. The beautiful stain glass windows in the church are a more recent addition, donated by Australians as a memorial to Australian and British POWs and as a thanksgiving to the courageous people of Sabah who helped them.

Close by is the Catholic St. Mary's Cathedral. This is a modern structure as the original church did not survive the War.

Continuing to the bottom of the hill along Jalan Puncak, we skirt the padang, where colonial types would have played cricket, and visit another Chinese temple, Sam Sing Kung. The name means "three saints temple", referring to Kwan Woon Cheung, the deity of righteousness, Goddess Tin Hou, a deity worshipped by fishermen, and Emperor Min Cheong, a deity of students, to whom anxious school children and parents pray for good examination results.

Sam Sing Kung Temple was built by Chinese communities from Guangdong Province, namely the Hakka, Cantonese, Hainanese and Teochew. It was completed in 1887, making it one of the oldest surviving structures in Sandakan. One of the temple's more important artifacts is a bronze bell. The Chinese characters engraved on the bell are Xian Da Gang meaning the “harbour where fairies alighted.” Could this be the origin of the name Sandakan?

From here we pass the Malaysia Fountain and are now back in the heart of the town where we can see the Harrisons Trading Building, and the two oldest banks in town, HSBC and Standard Chartered. Our Sandakan Heritage Trail ends here.

Puu Jih Shih Temple. This is a magnificent Buddhist temple built in 1987 situated a few kilometres from the town centre (take a taxi - it is too far to walk). It is perched on a hilltop with panoramic views over the town and the Sulu Sea.

Masjid Daerah Sandakan. This modern mosque is an impressive size and is designed in bold architectural style. It looks better from a distance. It is located close to Buli Sim Sim, the area where Sandakan began with stilted wooden houses built above the sea.

Sandakan Heritage Trail - Where to Eat

Apart from the English Tea House already mentioned, I tried the Balin Restaurant on the rooftop of the NAK Hotel where I was staying. Great ambience, reasonable food, good drink selection and superb views.

The waterfront area from the newly finished Four Points Sheraton, past the Swiss Inn and Harbour Square up as far as behind the Gentingmas Mall has been given a facelift and is now a pleasant waterside location to eat or have a drink.

I stayed at the NAK Hotel. See my review here. (since closed)

The Four Points Sheraton looks the smartest place in town.

The Sandakan Hotel has a central location and seems OK.

The Sabah Hotel looks a bit more upmarket with lush gardens and a pool but is still close to the town centre.