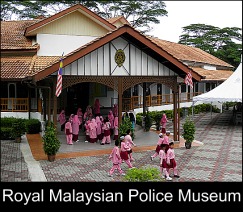 The Royal Malaysian Police Museum contains a fascinating collection of artefacts and exhibits detailing the role and history of the RMP from its inception up to the present day.

Since 1997 the RMP Museum has been housed at No.5 Jalan Perdana (formerly Jalan Venning) in a building which used to be the Senior Police Officers' Mess.

The exhibits are arranged in 3 galleries: 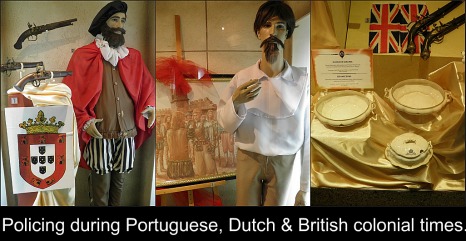 On entering the museum, the first gallery explains how policing used to be carried out during the days of the early Malay Sultanates, for example where the Temenggung performed the role of police chief and prison superintendent among his many other responsibilities.

Walking through replicas of old Malacca streets you learn about policing during the Portuguese and Dutch colonial eras before arriving at the British era where today's RMP has its origins.

You see examples of police uniforms through the ages together with other artefacts such as a set of ceramic soup tureens used by Straits Settlements police officers in Penang during the 1820s. 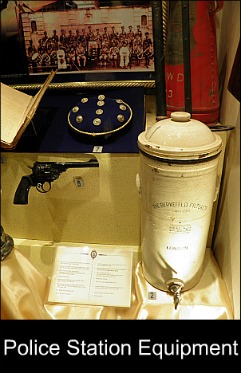 The everyday items used by these earlier police forces are of interest such as an ancient typewriter, a pith helmet, notebooks, a drinking water filter, a fire extinguisher, a revolver, buttons and so on.

Models of police vehicles and motorbikes are on display here. There is an impressive armoury room filled with police firearms (revolvers, rifles, automatic weapons, grenades etc.) and weapons used by an earlier generation of bad guys (Communist Terrorists CT's, organized criminals, triads) such as knuckledusters, knives, sticks, swords and more. 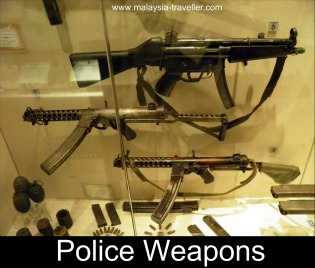 The final gallery covers the Malayan Emergency and describes the sacrifices and struggle against the CT's and the success of the police's Special Branch in particular in helping to defeat that determined enemy. 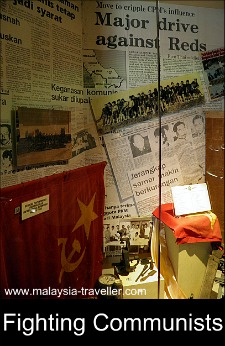 There are also some interesting displays on the police's role in fighting organized crime syndicates' drugs and forgery operations and in busting secret societies (triads). One display shows the equipment used in the swearing-in ceremony of Ang Bin Hoay (one such secret society) which involves decapitating a white cockerel.

The Royal Malaysian Police Museum's bulkiest exhibits are outside in the grounds.

1. Armoured Wickham Trolley. An armoured railway car (see photo) used from 1953-1960 to guard the track. It was manned by 5-6 police personnel. It must have been hot! 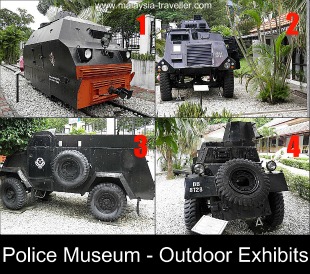 9. A Japanese WWII cannon and a British cannon.

The grounds also include a monument listing the names of police officers on a Role of Honour having received various awards and medals.

In my opinion this is an excellent museum and well worth spending an hour or two. There is a lot of detailed information and it is well displayed. The police staff manning the reception desk were polite and helpful. It is also free. I suggest combining the visit with the Islamic Arts Museum next door, another excellent museum.

The museum is closed on Mondays.

The Royal Malaysian Police Museum does not appear to have its own website at present.

You can find a map on my Kuala Lumpur Lake Gardens page.

Free parking is available at the entrance which is behind the Islamic Arts Museum.

The old Kuala Lumpur station is around 5 minutes walk away.

You can walk to Royal Malaysian Police Museum as part of my Kuala Lumpur Lake Gardens trail.