This museum is permanently closed as the airbase is being redeveloped. No news yet on whether the museum will be reopening elsewhere.

The Royal Malaysian Air Force Museum is located at KL Airbase, the oldest base in Malaysia which was handed over to the RMAF in 1960. It is on the site of the old Sungei Besi Airport which was jointly operated by the military and the Civil Aviation department. It served as the country's first international airport until Subang airport opened in 1965.

The RMAF Museum was opened in 1985 with a single hangar and just five aircraft exhibits. It has since expanded and today boasts 14 aircraft and helicopters lined up outside on the airfield and another 13 aircraft inside a large hanger. 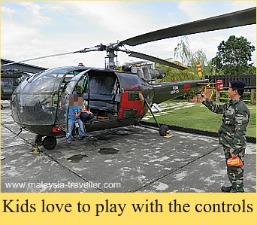 The aircraft exhibits include:

Scottish Aviation Twin Pioneer (the first aircraft acquired for No.1 Squadron of the RMAF).

A school trip was visiting at the same time as me and the kids were enjoying being able to sit in the cockpits of many of the outdoor aircraft and playing with the controls.

The museum provides information on the history of the RMAF which was formed in 1958. RAF Air Commodore AVR Johnstone was assigned as Advisor to the Malaysian Government and became the first Chief of the RMAF.

Besides the aircraft exhibits there are two small galleries containing exhibits and information such as details about the role of the RMAF in counter-insurgency operations during the Emergency period and subsequent contributions to peacekeeping operations in the former Yugoslavia (1993), Somalia (1993-1995) and Cambodia (1991-1993).

There is a Gift Shop at the entrance selling aircraft models at RM195 each and other souvenir items.

Interesting for children, aircraft enthusiasts, former service personnel, historians and others. Definitely worth visiting. Not a big museum. One hour would be ample time to view all the exhibits.

The Gift Shop is open Tuesday-Thursday from 9am to 12 noon only.

Click here to see the RMAF Museum's Official Website. Be sure to click on their 'Wreckage' button to read about the fascinating accounts of various aircraft wreck sites found in Malaysia.

How To Get There

The Royal Malaysian Air Force Museum is located inside the Air Force base complex. Stop at the security gate at the base entrance and the guard will show you where to go (just inside the base on the left hand side).

There is plenty of free parking available.