Rantau Abang used to be the place to come at night to watch leatherback turtles lay their eggs.

The beach here slopes steeply meaning that mother turtles do not have to waste too much energy to reach a suitable spot near the vegetation line to begin laying their eggs.

Also the size of the sand granules on this beach is large which might contribute to making the sand a more welcoming temperature for leatherback mums-to-be.

For these reasons this beach became one of only six main nesting sites in the world for these gentle giant creatures which can grow up to 3 meters in length and weigh up to a ton.

Back in 1956, when I was just an egg myself, 10,000 nestings were reported along this beach. By 2003 that number had dwindled down to just 2. It has now been several years without any sightings so the leatherback is effectively extinct in this area.

What has caused this catastrophic implosion to the species?

Partly it was the poor treatment these shy and sensitive turtles received on land from uncaring visitors and egg poachers. Other factors were probably sea pollution and fishing practices. Even well intentioned hatchery programmes may have contributed to the problem by producing only female turtle eggs which go unfertilized. 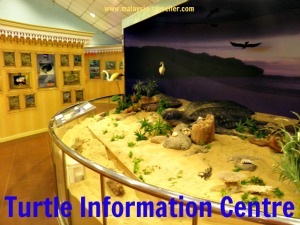 Whatever the reason, the only turtles that tourists are likely to see at Rantau Abang these days are the stuffed exhibits at the Turtle Information Centre on the main road here.

The Turtle Information Centre is worth a quick look as it provides useful information but in a way it is a sad reminder of what has been lost. 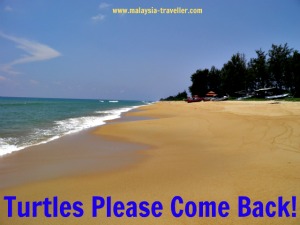 The beach here is beautiful with clean orange sand and clear water. The steep slope probably continues under the water which might explain the red flags flying on the beach.

There is some basic accommodation here.

It is still possible to see turtles in Terengganu. Go to Redang Island. I have also seen newly hatched ones on the Perhentian Islands.

How to Get To Rantau Abang

The location is marked on the map on the Top Terengganu Attractions page. 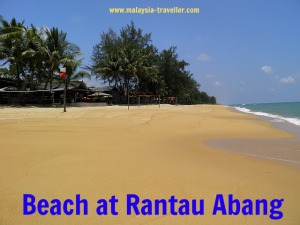