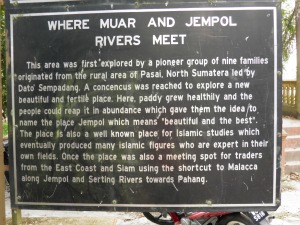 Jalan Penarikan, also known as the Penarikan Portage (or porterage) is the name given to a location at Jempol, near Bahau in the state of Negeri Sembilan, where the Sungai Serting and the Sungai Jempol flow within a few hundred metres of each other.

The Jempol River joins the Muar River which makes its way westwards until it flows into the Straits of Malacca at the town of Muar.

The Serting on the other hand runs into the Bera and then into the Pahang River which flows eastwards into the South China Sea at the town of Pekan.

Malay traders have for centuries known that these rivers could be used as a short-cut across the Malay Peninsula. All that was needed was to drag their boats overland for the short distance between the two rivers. It is this dragging which is the source of the name Penarikan, the Malay word for 'pulling'. 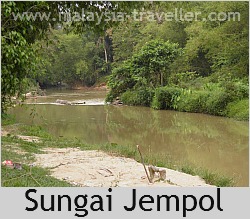 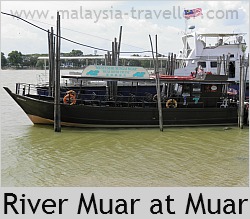 Now that roads and aircraft criss-cross the peninsula with ease, the old inland waterway route has fallen into disuse but I believe in modern times there has been the occasional research expedition studying the economic potential of developing this inward waterway link.

As far as I know the rivers are still navigable for small craft so if you fancy an extreme canoe or kayak trip, take a look at this map which I plotted on Google Maps.

Please zoom in and look closely because it took me about two hours to trace the route.

How long would it take to travel the entire route by canoe?

The journey is 540km long which is a very, very long way in a canoe. If you could manage an average paddling speed of 5.5km per hour for 8 hours per day we are talking about a trip of over 12 days.

Probably better to use a boat with a motor and only then with an experienced guide, plenty of careful planning, support and back-up. 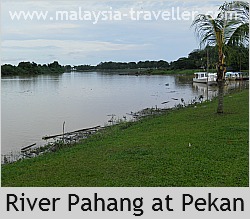