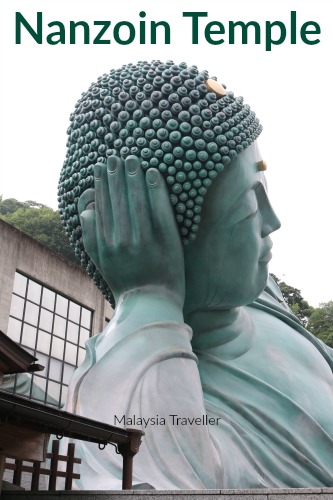 The temple claims it is the biggest bronze statue in the world. A few years ago I tried compiling a list of Asia’s largest reclining Buddha statues for my Thrifty Traveller blog (read the article here).

Nanzoin Temple came in at number 15 on the list but I guess those larger statues are not made of bronze - probably concrete, stone, steel, plaster or wood. 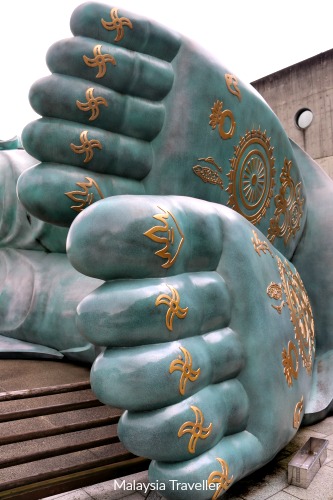 Whether it is the largest or not it certainly is impressive but not that well known internationally considering its size. 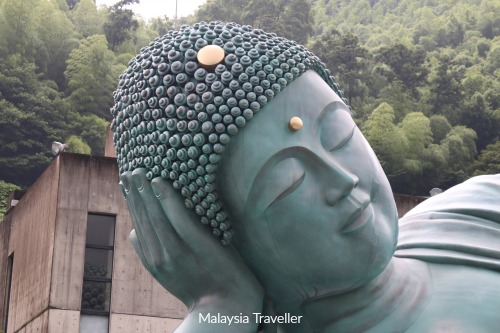 The statue, known as Nehan-zo in Japanese, meaning Buddha in the state of Nirvana, is fairly new, only unveiled in 1995. It was built to contain the sacred ashes of Gautama Buddha and two disciples, Ananda and Maudgalyayana, which were presented to the temple by Buddhists in Myanmar in recognition of the charitable work the temple has performed over the years for children in Myanmar and Nepal. 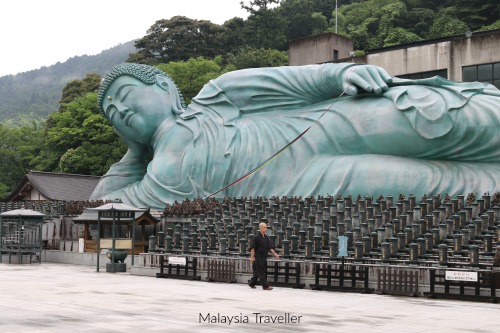 The small columns in front of the statue are nokotsudo where the remains of the deceased are stored. There are said to be 4,315 of these. 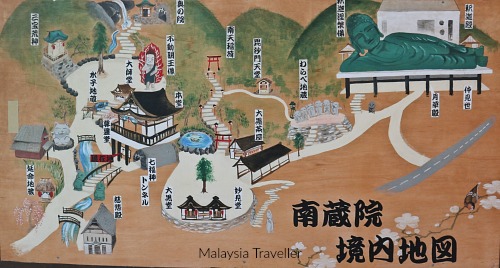 The statue is just the highlight of a temple complex which includes the old Nanzoin Temple itself, built in 1899, and numerous other shrines, altars, statues and a couple of tunnels. The temple belongs to the Shingon Sect which was established at Mt. Koya between 1830-1844. 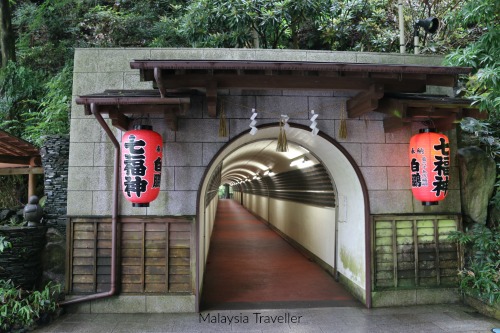 This is the Shichifukujin, Seven Gods of Fortune Tunnel. A diorama of the seven gods can be found in a recess in the tunnel wall. 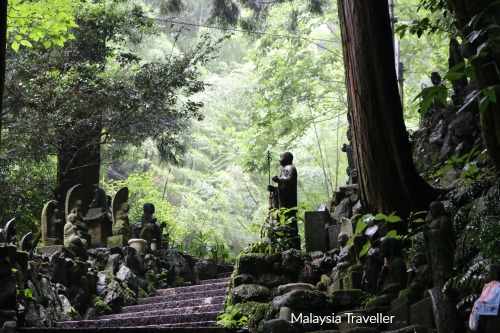 The scenery around the temple is superb, being built on a steep hillside covered in an ancient forest of cedar and redwood trees, with bamboo groves and blooming cherry trees in the spring. 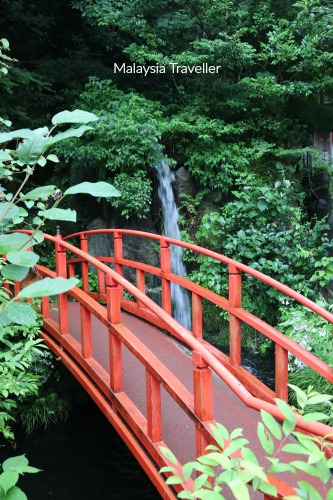 Small waterfalls and streams, crossed with traditional Japanese bridges, red Torii gates and forest paths add to the beauty of the place. 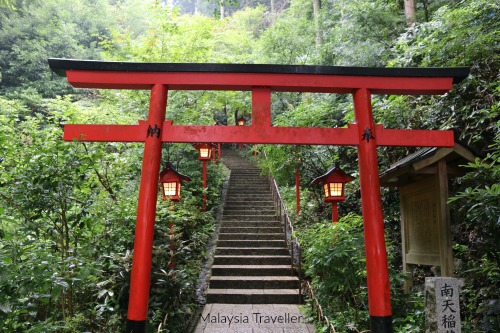 A light rain was falling during my visit which enhanced the charming, spiritual atmosphere. 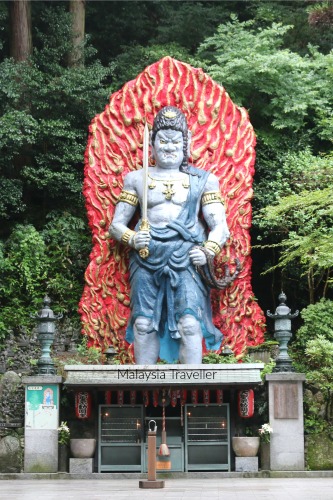 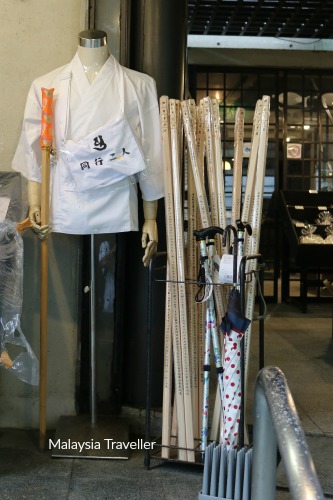 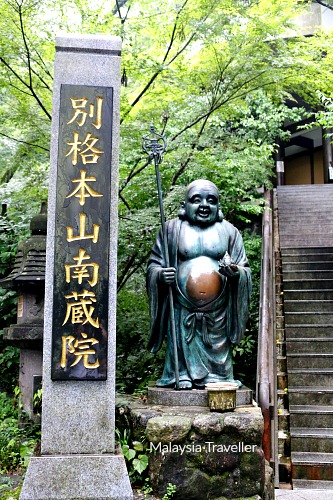 Buddha statue with a belly made shiny by visitors rubbing it for luck.

How to Get to Nanzoin Temple

It is easy to get to by train from Fukuoka’s Hakata station. The temple is just a short walk from Kido Nanzoinmae station which is on the JR Sasaguri Line, which is part of the JR Fukuhoku-Yutaka Line. 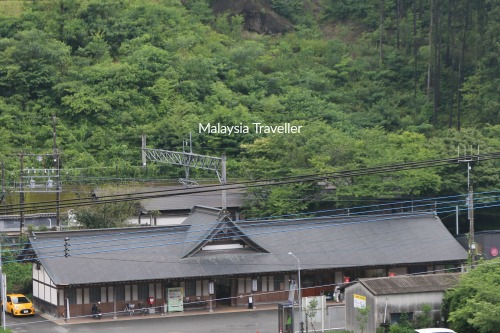 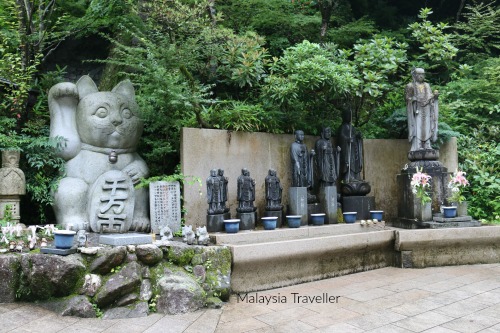 Open daily from 9am to 5pm.

Admission is free but there is a charge of ¥ 500 to see the basement level prayer room underneath the statue. 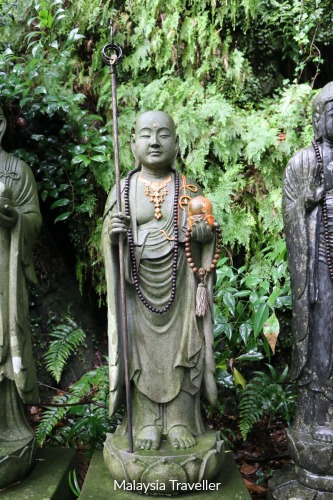 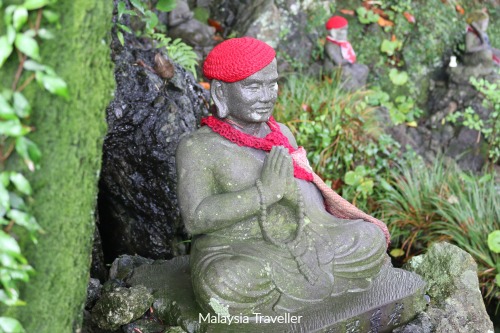