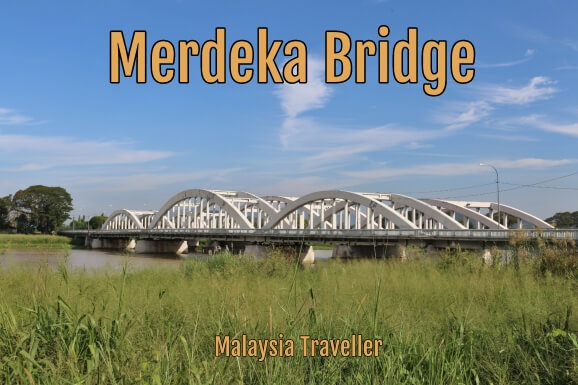 Merdeka Bridge Kedah (Jambatan Merdeka) was built in 1955 and officially opened in 1957, the year of the country's independence, by Malaysia’s first Prime Minister Tunku Abdul Rahman. The bridge spans the Sungei Muda, the longest river in Kedah which has its source far away near Tasik Muda close to the border with Thailand. 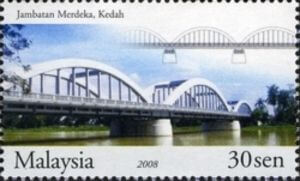 The bridge carries Federal Route 1, a major north-south artery linking Butterworth and Sungai Petani and the river at this point marks the border between Penang and Kedah states. 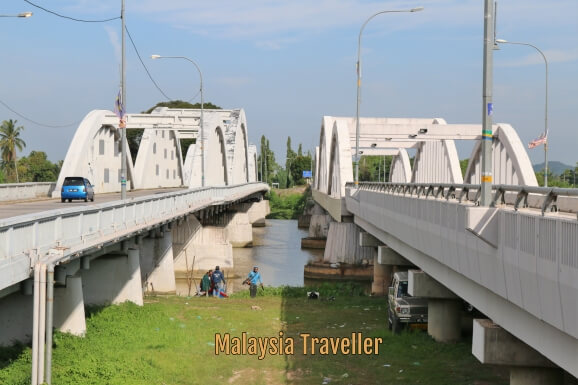 The 100 metre long bridge is of concrete truss and steel girder construction. A second bridge of similar design, the one on the right in this photo, was added much later in 2008 to cope with increased traffic.

This location was the scene of a clash between British and Japanese forces in 1942 during World War Two. There was an earlier bridge here which the British partially destroyed in an attempt to slow the Japanese advance down the Malay Peninsula. But the Japanese soldiers swam across, dispersed the British forces defending the bridge and repaired the damaged section to enable their troops and vehicles to cross.

An old British bunker from that battle can still be seen a short distance from the Penang side of the bridge. If you zoom in on the Google map below you can just make out the concrete bunker. It's overgrown.

Today the bridge is much more peaceful and fishermen like to sit in the shade of the bridge to try their luck.

How To Get to Merdeka Bridge Kedah

You can read about another famous Malaysian bridge, Victoria Bridge at Karai, Perak on my blog.