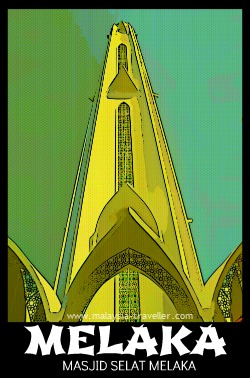 The Melaka Straits Mosque is known as Malacca's floating mosque as it is built on stilts above the sea.

It was officially opened by Malaysia's King on 24th November 2006. It is constructed with modern Islamic design and craftsmanship. While the main dome is Middle Eastern in appearance, the four corner turrets are topped with typical Malaysian rooflines.

The facade of the mosque is decorated with stained glass windows with Islamic motifs. The minaret also has a striking and unusual design.

It is an attractive building that has already become popular with photographers.

The mosque is located on Pulau Melaka which is a man-made reclaimed 40 hectare island just off the city centre of Melaka.

The island has been plagued with difficulties since construction commenced in 1996. First of all conservationists were opposed to the location of the island which is where many submerged historical artifacts, including the wrecks of many Portuguese ships, were believed to be lying.

These have now been buried forever under tons of rocks and sand. Then the ambitious construction project ran into financial difficulties due to the global economic crisis.

In the past couple of years, Melaka's state government has taken over responsibility for the project and construction has resumed.

On the drawing board, or at various stages of completion, are mixed residential and commercial units and a number of leisure/tourism projects. 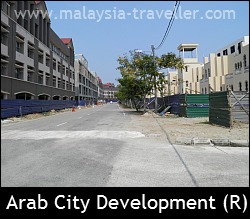 Right next to the mosque and nearing completion is Arab City which is a Middle Eastern themed mall complete with Dubai-style wind towers. Apart from shopping, Arab City is intended to have an Egyptian Museum, a Moroccan Hammam (spa) and a lagoon with watersports.

Squeezed between the mosque and Arab City is the slipway used by the Melaka Duck Tours, an amphibious vehicle tour of the city. 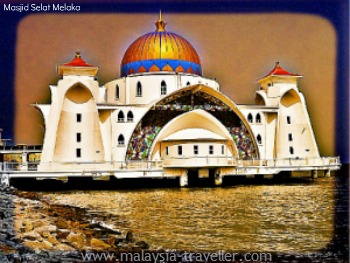 How to Get to Melaka Straits Mosque