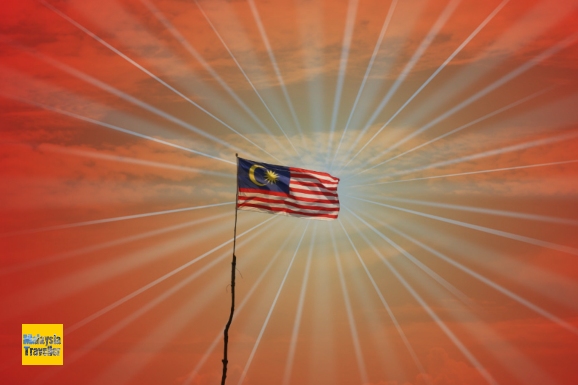 The Malaysian National Anthem is called Negara Ku which can be translated as My Country or My Motherland. The history of how it came into being is quite interesting.

During the 1950's the soon-to-be independent nation of Malaysia (then called Federation of Malaya) found itself without a national anthem, although the eleven states making up the Federation each had their own state anthems. It was decided to hold a competition to compose a suitable anthem for the new nation. Over 500 submissions from all over the world were forwarded to the selection committee but none were considered good enough.

The committee then invited a few distinguished composers to write an anthem, including Benjamin Britten who took up the offer. This was his suggestion:

Britten's composition was also rejected. Perhaps since Malaysia was breaking away from Britain it did not want its national anthem to be composed by another Englishman, especially with a name like Britten. Or perhaps the tune sounded insufficiently Malaysian (too Japanese some have suggested). One of the YouTube commenters suggested it was too emotional and if it was used every morning in school the kids would feel sleepy! At least it was short, which is always a good thing for national anthems.

In the end it was decided to use the Perak State Anthem and it became the Malaysian National Anthem on 5 August 1957 with new lyrics written by the Prime Minister and his selection committee.

Personally I'm not a great fan of national anthems (my own country's God Save the Queen for example is particularly tedious) but I quite like Negara Ku for its catchy tune and mildly stirring sentiment. Here is a patriotic video of the national anthem from a few years ago with the Bahasa lyrics shown on the caption.

An English translation of the lyrics is as follows:

For whom I spill my blood,

of peace and joy,

Long may our King,

Or an alternative translation:

Oh, my country, the land where my life began

Its people live in progress and harmony

With God-given blessings of happiness

Our King reigns in peace

It is said that the Perak State Anthem was introduced in the 19th century via Sultan Abdullah Muhammad Shah II who had heard and liked the tune while he was in the Seychelles. Following the assassination of the first British Resident of Perak, JWW Birch in 1875, the Sultan of Perak was deposed by the British and exiled with his family to the Seychelles.

The story goes that his replacement, Sultan Idris was invited to London in 1888 by Queen Victoria. He was accompanied by Raja Mansur, eldest son of the deposed Sultan Abdullah Muhammad Shah II, as his aide-de-camp. When their ship docked at Southampton a British Government official asked Raja Mansur for the music of the Perak State Anthem so that it could be played when His Highness was given a ceremonial welcome. Rather than admit that Perak had no State Anthem he invented one. He explained that he had not brought along the music but he hummed the tune of his father's favourite song from the Seychelles to the Bandmaster who wrote down the notes and arranged it into something suitably dignified for an anthem. Thus was born the Perak State Anthem which came to be known as Allah Usianya Sultan.

The tune was based on a popular French melody called La Rosalie composed by French songwriter and poet Pierre-Jean de Béranger (1780-1857) who, at the time of his death, was described as the most popular poet there has ever been in France.

Before it became the Malaysian national anthem it was a popular tune played at parties and cabarets in Malaya, Indonesia and Hawaii among other places. Here is a rather nice Cantonese version:

Of course now that it is the Malaysian National Anthem it has to be treated with respect and performance as a popular melody is not permitted.