Lightning strikes In Malaysia are a very common occurrence due to its tropical climate and location. Malaysia's thunderstorms are spectacular, violent and very frequent. The Klang Valley has an average of 240 days of thunderstorms in a year. This compares to just 10 for London. 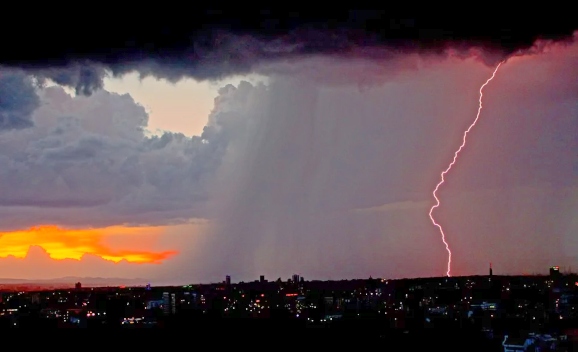 When I was living in Putrajaya my house suffered direct hits by lightning on 3 occasions over 4 years, knocking out the power (who said lightning never strikes twice in the same spot)? I was told this may have been because my house was located next to a lake facing some government ministry buildings which were equipped with high quality lighting rods which diverted the strikes away from their building and on to neighbouring properties like mine.

If you are safely at home or in a car during a thunderstorm you can enjoy the show and marvel at the power of nature. However if you are caught outdoors, while hiking for example, it can be quite a frightening experience. If you cannot reach the shelter of a sturdy building, the advice is to make yourself small by squatting down with feet together, arms tucked in and head down between your knees. This reminds me of the brace position during an air crash and is probably equally pointless but it is said to be the best you can do. Avoid sheltering under trees and stay away from iron or copper pipes. Never use an umbrella. Remember that lightning can strike even before it starts to rain and can continue after rain has stopped.  Stay away from electrical equipment and cables, including telephone landlines. Mobile phones are safer. Having wet clothes apparently reduces the chance of serious injuries if you are struck by lightning as it lets the current flow over your clothes rather than through your body.

Return from Lightning Strikes In Malaysia to Malaysia Trivia

Return from Lightning Strikes In Malaysia to Home