Kuala Lipis is a small town situated at the confluence of the Sungai Lipis and the Sungai Jelai.

These rivers have played a major part in Kuala Lipis' story, firstly as a means of communication. When Kuala Lipis was first chosen by the British to be the administrative capital of Pahang, it could only be reached by two or more days of hard paddling by river. The Jelai River joins up with the mighty Pahang River at Kuala Tembeling which then flows down to the South China Sea at Pekan, the royal capital of Pahang.

The rivers have also shaped the town by breaking their banks periodically and causing destructive flood damage to the lower lying parts of town which could explain why many of the surviving heritage buildings are sited on hilltops.

Fortunately there are enough of these old buildings remaining to give us a flavour of how life must have been in days gone by.

These are marked on my map: 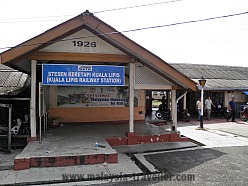 We'll start our Kuala Lipis Walking Tour at the Kuala Lipis Railway Station. If you are arriving by slow train from Gemas you will been sitting on the train for six hours so you probably need to stretch your legs.

The railway station was built in 1926 and looks as though it has hardly been updated since. Lovers of nostalgic railway memorabilia will like this place. 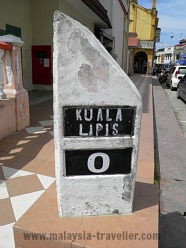 Exiting the station and turning right you will notice a curious milestone informing you that Kuala Lipis is zero miles away. Presumably it marks the middle of town and indeed it is almost the middle of Peninsular Malaysia since the geographical centre of the Peninsular is in this district. 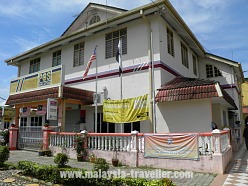 The milestone is outside one of the oldest Post Offices in the country, dating from 1910. The entrance to the Post Office used to face the main road (Jalan Besar) but following flood damage in 1971, it was shifted to the side. 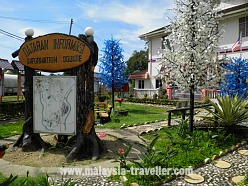 In front of the post office is a small open area called Information Square where the local council have thoughtfully erected some notice boards providing a map showing the whereabouts of the heritage buildings and tourist attractions in town and details of the main hotels.

A couple of these hotels (budget) are located on the opposite side of the street, the Tong Kok Hotel and the Hotel London. Also nearby is Appu's Guesthouse, aimed at backpackers, where you might be able to arrange trekking trips to Kenong Rimba Park. The accommodation looks rather basic - I prefer my houseplants to be in pots rather than growing out of cracks in the walls! 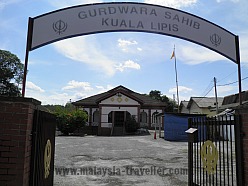 Further down the street is the Gurdwara Sahib Sikh Temple which is housed in a colonial style bungalow dated 1918. The Sikh community in Kuala Lipis mostly arrived with the British as police, railway workers or soldiers. Many have since moved on to greener pastures. 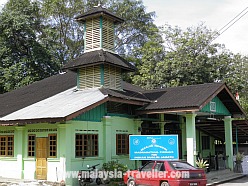 Around the corner on Jalan Jelai is the former State Mosque which was built in 1888 and made mostly from wood. Although the mosque is located close to the river it has seemingly never been damaged by the frequent floods. The mosque was paid for by a Yemeni merchant named Habib Hassan. Perhaps he used to buy and sell the fragrant gaharu agar wood which was harvested by the indigenous Batek people from the nearby forests and which is highly prized in the Middle East. 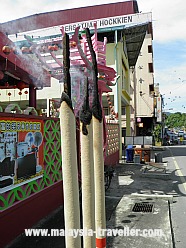 Houseboats called Rakit used to be moored on the banks of the Jelai River near here but they have since been sunk or relocated which is a pity.

Continuing on Jalan Jelai we pass the Thean Hou Temple. Although this temple dates from 1898, the outer compound walls are clearly much more modern, being made of concrete and gaudily painted pink. There were some giant incense sticks burning outside when I visited.

A bit of sweaty walking is required to cover the 4 remaining sites on my Kuala Lipis Walking Tour. If you have a car with you, driving might be preferable. 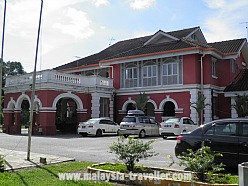 The Residency Resthouse sits atop a knoll overlooking the town. This fine building was once the official residence of Sir Hugh Clifford, Britain's representative in Pahang and adviser to the Sultan. Those days it must have been a splendid home but it has since come down in the world.

The date on the entrance porch reads 1922 but the main residence must be older as Clifford lived there from 1896-1903. Following the Second World War, the residency was used as a school hostel for a while and then left empty for 18 years before being converted into a Government Rest House. It used to have a museum corner next to the lobby but the display cases are now empty. Rooms can be had from RM40 per night but do not expect luxury. This place is in need of a smart makeover. 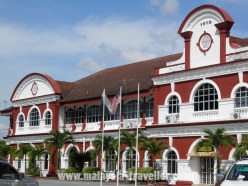 A large red classical building dated 1919 on a low hill above the roundabout as you enter town is the Lipis District Office and contains various local government departments.

Behind the District Office is the Clifford School which was opened in 1913 as the Government English School. The Malay Hostel Building (1926) is in the school campus and was built to accommodate boarders who came from all over Pahang state. The Clifford school was the alma-mater of many future statesmen such as the Sultan of Pahang and Tun Abdul Razak (Malaysia's 2nd Prime Minister).

On the other side of the school's playing fields is the Pahang Club (1907). This large black and white wooden building would have been the centre of Kuala Lipis society during colonial times with its bar, billiard room and recreational facilities but now it appears to be on its last legs. The structure appears to be sagging in places and the club doors were firmly padlocked when I visited recently (Jan 2013). Unless a new role can be found for the building I suspect its days are numbered.

Other heritage buildings which I should have visited on my Kuala Lipis Walking Tour, but didn't, are: