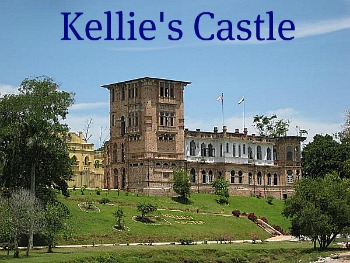 A lot has been written about Kellie's Castle and its owner, William Kellie Smith. It is a true rags-to-riches story.

William Smith was born in Elgin, Scotland and grew up on a farm in the nearby village of Dallas. As the 3rd of 5 children in a humble farm-working family, few would have imagined that he would progress far in life but fortune must have been smiling on young William.

At the tender age of 20 he, like many other Scots of his generation driven by desperation and a spirit of adventure, set sail for Malaya to seek his fortune.

He started out as a civil engineer and worked with Charles Alma Baker, another soon-to-be famous Batu Gajah resident, on road building and forest clearing projects and in the lucrative business of contract surveying. In 1893 he worked with the Kinta Valley Railway as an assistant engineer before becoming a government contractor.

With money in his pocket, he took advantage of the colonial government's generous land concessions granted to Europeans for establishing plantations.

He secured 3,000 acres at the bargain price of 10 cents per acre for the first 10 years, rising to 50 cents thereafter. With such terms it would have been difficult notto make money. He grew coffee initially and with the profits built the first Kellas House, a wooden bungalow, on the site of today's Kellie's Castle.

By 1896 however coffee prices had collapsed due to the growth of Brazilian coffee plantations. (Britain got revenge on Brazil by stealing some rubber seedlings from the Amazon rainforest, cloning them at Kew Gardens and then planting vast acreages of rubber trees all over Malaya which became the world's leading rubber producer just as demand for rubber tyres in the US car industry was starting to take off.)

William Smith wanted to switch from coffee to rubber but lacked capital. Then in 1903 he returned to Scotland briefly to attend his mother's funeral. Out of respect for her he began to use his mother's maiden name, Kellie, in addition to plain old William Smith.

With the change of name came a change in fortune. On the ship voyage back to Penang, he met and wooed Agnes, an heiress who was due to come into an inheritance of $300,000 in 1906. They were married soon after landing back in Malaya and their first child Helen was born the following year, 1904.

With confidence renewed by Agnes' imminent 'Great Expectation', William secured a loan from a Singapore firm and set about developing his estate.

Being something of a serial entrepreneur, the Richard Branson of his generation, Kellie Smith tried his hand at manufacturing patchouli perfumes from the leaves grown on his estate and also distilling lemon grass. These ventures however were not successes.

He also invested in a sawmill to process logs felled on his estate.

Agnes was informed that receipt of her inheritance money would be delayed until 1908 and this created a major liquidity problem for William who also had his credit line cut off from Singapore, and his Tin Dredging Licence cancelled due to lack of activity.

He was forced to go cap-in-hand to the Government who would only grant him a fraction of what he needed. He had no option but to sell off part of his estate.

When the inheritance money finally came through in 1908 the Kellie Smith's were wealthy once again and could restore their place in the local community's social ranks.

Agnes being from a wealthy background and living in the Far East for the first time was probably less than impressed with William Kellie Smith's old wooden bungalow.

From 1909-1910 he set about replacing his wooden Kellas House with a cooler brick and stone version, the ruins of which are visible today behind the main Kellie's Castle building. 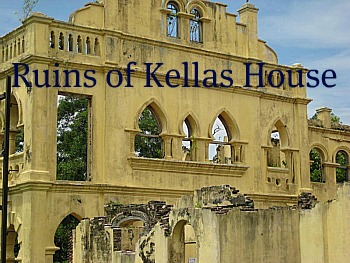 What Agnes thought of Batu Gajah society is unknown but with only 30 Europeans, of which perhaps 6 or 7 were women, there was no doubt a good deal of rivalry and 'keeping up with the Joneses'. Alma Baker's wife was also from a wealthy background and they too built a fine house in 1910 which may have contributed to the Kellie Smith's later decision to construct Kellie's Castle. 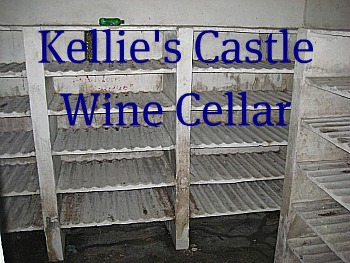 In 1915 their second child, a boy named Anthony, was born and this may have been the impetus to start construction of a major extension to their stately home.

Plans were drawn up and craftsmen imported from India to begin construction.

Unfortunately World War I was underway and this disrupted the supply of materials and manpower so progress was slow.

Then, after the war, the Spanish Flu pandemic which was sweeping the globe reached Batu Gajah and killed many of the skilled masons, plasterers and tilers who were working on the project.

Kellie Smith's Hindu workers proposed that a temple be built to honour the deity Mariamman in order to stop the sickness. A temple was built 1.5km from Kellie's Castle and the flu epidemic died away. In gratitude, the workers built an effigy of a white man in colonial attire representing Kellie Smith on the roof of the temple alongside statues of deities. This effigy can still be seen today. 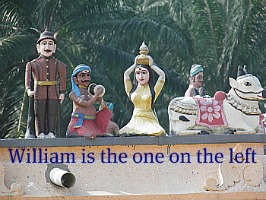 Work on the Castle resumed and by 1926 it was nearing completion. By this time young Anthony had been sent back to Britain for his education and it seems Agnes had gone too. Whether her departure was temporary or she had become fed up with Batu Gajah society is not known.

William Kellie Smith visited Britain to see his wife and son and then proceeded to Portugal from where he was ordering a lift to install in the Castle, which would have been the first elevator in Malaya. While in Lisbon he contracted pneumonia and died. He was buried there.

Agnes never returned to Malaya and she sold her interest in the estate. The new owners were not interested in continuing the Castle and neglected it to be reclaimed by the jungle.

Fortunately the Malaysian Government, realising its tourism potential and heritage value, have since cleared the creepers and trees growing on the site and have opened it as a tourist attraction.

No plans showing Kellie Smith's design for the house have survived but on a recent Discovery Channel documentary a Malaysian architect Mr.Chen Voon Fee speculates how Kellie's Castle might have looked if it had ever been finished, based on what survives today and old photos of the Kellas House before it was substantially destroyed by Japanese bombing during their WWII occupation.

It really would have been a splendid building and among the finest homes in Malaya. The design incorporates features similar to those found in Kuala Lumpur's Sultan Abdul Samad and High Court buildings with moghul horseshoe arches over doorways and windows, copper onion domes and ornate neo-classical friezes.

In my opinion it would be great if it could be restored and completed according to Mr. Chee's concept. It would make a lovely boutique hotel and ensure that the building gets the care and maintenance that it needs for its longer term survival.

There have been reported sightings of ghostly apparitions wandering the corridors at night. Perhaps it is William Kellie Smith's spirit returning to see if the building has been finished. Let construction resume now so that he can finally rest in peace.

Kellie's castle is open daily from 9am to 6pm.