Gunung Senyum Caves are located in Pahang about 45 minutes drive from Temerloh.

Gunung Senyum, which means Smiling Mountain, is a limestone outcrop which rises sharply 478m above the surrounding oil palm-dominated countryside.

The mountain is riddled with caves, some of which are visible as soon as you pull up in the car park of Gunung Senyum Recreational Forest.

Next to the car park is a traditional Pahang house dating from 1907, a park management office, a food stall, campsite, toilets and surau. There is also a lake, partly spanned by a suspension bridge. The remains of a defunct aerial ropeway/flying fox are also evident.

A poster next to the management office lists 25 caves found at Gunung Senyum. Here is a rough translation and summary of the list:

Gua Terang Bulan (Moonlight Cave): Sunlight filtering through a hole in the top of this large cave bathes its walls in a rainbow of colours.

Gua Gajah (Elephant Cave): This cave's entrance is shaped like an elephant.

Gua Silat: Said to have been a place for meditation and practicing Silat (Malaysian martial arts).

Gua Tali Air: There are many species of fish living here.

Gua Hidang: Something to do with serving food but I could not understand the translation.

Gua Kelawar (Bat Cave): Quite dark and home to bats.

Gua Piala: Calcium and silica rocks which sparkle when exposed to light.

Gua Merlap: At the left of the entrance there is a throne-like wedding dais.

Gua Tapa (Meditation Cave): There is a stone man sitting cross-legged in front of the entrance and three wells that never run dry.

Gua Rangkak: To enter the cave you have to crawl. In it there is a large dome-shaped roof and on the walls are verses of the Holy Quran.

Gua Terowong: The cave is an 'L' shaped tunnel.

Gua Kapal: In the shape of a ship.

Gua Mayat: Rocks shaped like wrapped corpses lie here. The last thing you want to encounter in a creep cave!

Gua Nesan: Stones rising out of the cave floor resemble pairs of gravestones. 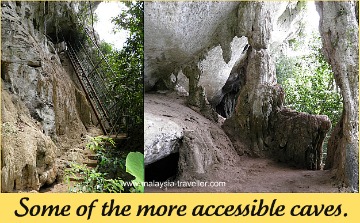 It is possible to climb to the top of the mountain, viewing caves along the way. According to the signboard, it takes six and a half hours to complete the up and down trip. I did not try as I was alone and there was insufficient time.

Instead I confined myself to the more easily accessible caves near the foot of the mountain. 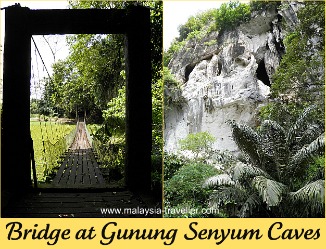 Gunung Senyum Caves are interesting to visit but to do justice to this place it would be better to go with a group of people including someone with experience of caving.

How to Get to Gunung Senyum Caves

The location of Gunung Senyum Caves is marked on my Caving in Malaysia page.

There are no admission or parking charges.

The park is closed on Fridays. 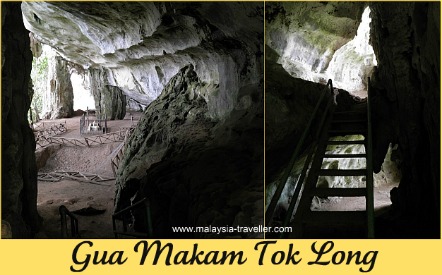