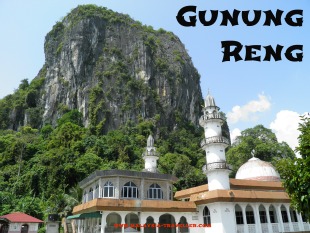 You cannot miss Gunung Reng if you are driving on the East West Highway in Jeli district in western Kelantan. It is a spectacular limestone outcrop located close to the highway between the towns of Jeli and Belimbang.

I went there recently on my way from Baling to Kota Bahru.

Just before the mosque in the photo there was a rough road leading to the recreational park at the foot of the hill.

I could not see any steps or path going up the side of the hill so I suppose it is not possible to climb to the top unless you are a skilled mountaineer with all the right equipment. 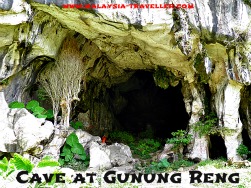 The highlight of my visit was the cave which was easily accessible next to the playground.

Even from the outside the screeching of bats was quite noisy. Inside was bigger than I expected. The stench of bat droppings was quite overpowering and the floor of the cave was slippery with green and black guano.

The screeching noise seemed to be coming mainly from a kind of chimney which disappeared up into the dark inner recesses of the mountain. 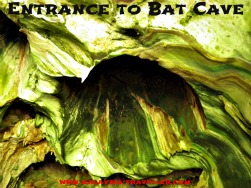 I expect the cave led deeper into the hill and I believe there are other caves to be explored but since there was no guide available I was not keen to go any further on my own without a torch.

Outside the cave a badly-weathered Tourism Malaysia information plaque provided some information on the legend which surrounds this mountain. It was a little confusing but I shall give you my understanding of it.

According to folklore there used to be a village on this spot called Kampung Tok Tala. Around 1400 years ago there was some serious partying going on lasting 7 days and nights which culminated in a contest where a dog was pitted against a cat at a time when the villagers should have been praying.

In divine retribution against this scandalous behaviour and animal cruelty this mountain was swept up in a storm from its original location several miles away and dropped on top of the village, the remains of which are, to this day, lying buried under the mountain.

It seems a bit far fetched to me but you never know. 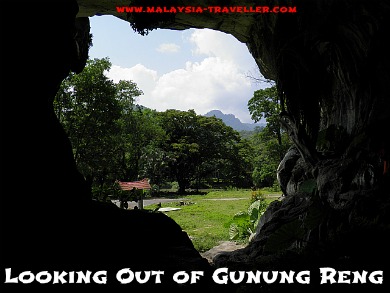 How to get to Gunung Reng

The location of Gunung Reng is marked on the interactive map on the Caving in Malaysia page. There is no entry charge and no gate to the cave entrance so I guess you can go at any time. At dusk you might be treated to the sight of thousands of bats emerging from the cave to look for their supper.