Gunung Raya is Langkawi's highest peak at around 872m (2,860 feet). This makes it the 225th tallest on my list of 300 Highest Malaysian Mountains.

It is one of the easiest to ascend because you can drive all the way up. If you prefer the exercise you can walk up - details below.

The mountain is roughly in the centre of the island and, from its peak, visitors can enjoy superb views over the whole of Langkawi and the surrounding seas.

There is a rather far-fetched local legend that the mountain is the petrified remains of a giant, a myth probably conceived in those far-off days when the villagers used to sit around the fire and drink too much coconut toddy.

Access to the peak is via a good tarmac road which joins Jalan Ulu Melaka.

At the start of the road is a toll booth where a toll of 50 sen is supposed to be payable but there was nobody on duty when I visited in February 2013.

The road winds its way up the mountain passing through thick forest and providing panoramic views whenever there is a clearing. Many bird species including hornbills are said to inhabit this area but I did not spot any hornbills.

The road is about 13 km long and it takes half an hour or more to reach the top by car. 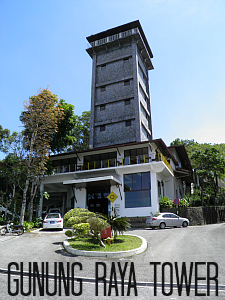 At the summit there is a fenced-off complex of buildings used by the Government and off-limits to visitors. There is also a communications station and a number of tall masts have been erected on the peak.

For the visitor there is the D'Coconut Hill Resort which includes an observation tower which visitors are able to enter for a fee of RM10.

After paying, you take a lift and then walk up a flight of steps to the top deck of the observation tower.

Here there is a kind of lounge with comfortable seating and a wrap-around balcony from where you can take photos of the view provided the weather is good.

The ticket price includes a cup of ginger tea (delicious). Other drinks are available for a price.

There is not a lot else to do on Gunung Raya.

The D'Coconut Hill Resort looked rather run down and the swimming pool could do with a good clean. In fact it was difficult to tell if the resort was even operating but I see from various websites that they are still selling their rooms.

The resort looks like it was once an exclusive hotel and could be again with a little renovation but for now I would not recommend it. 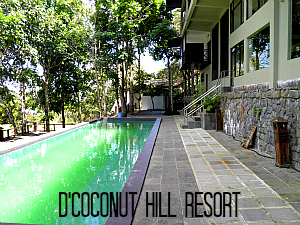 Just below the summit is a blue sign marking the point where the Tangga Helang Seribu Kenangan (roughly translated as Eagle Stairs Thousand Memories) starts and/or ends.

The distance covered is 3.1km and the estimated climbing time is 2 hours and 15 minutes.

The other end of the trail begins in Lubuk Semilang Park, close to Mardi Agrotechnology Park.

As you can see from this photo, the stairs are overgrown. 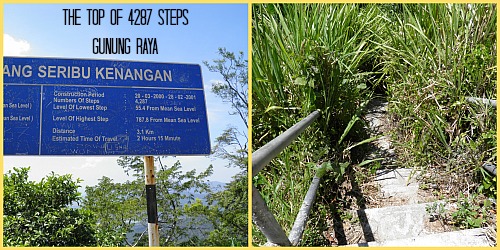 I toyed with the idea of walking up Gunung Raya instead of driving but the prospect of slippery, overgrown pathways and relentless steps was not so tempting especially as I would have to go back down by steps too.