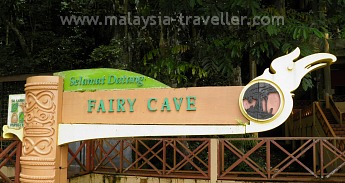 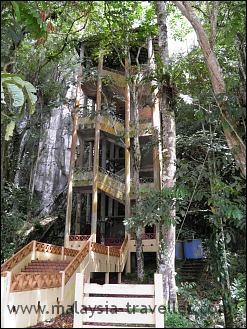 Fairy Cave (also known as Gua Pari) is an impressive show cave near the former gold mining settlement of Bau and about 40km from Kuching, Sarawak.

It is just a few minutes drive from another show cave, Wind Cave, and most tourists would combine both on a half-day trip from Kuching.

Access to the cave is via a four storey concrete staircase which brings you to the cave entrance.

You pass through a dim, narrow passage and up some steep wooden steps. It is fairly dark but you can manage without a torch, unlike Wind Cave where a torch is essential. Some might find this part rather claustrophobic but bear with it as the passage soon emerges into a massive cave with a huge opening which allows the light to flood in.

To get an idea of the scale of this cave, look for the person in this photo: 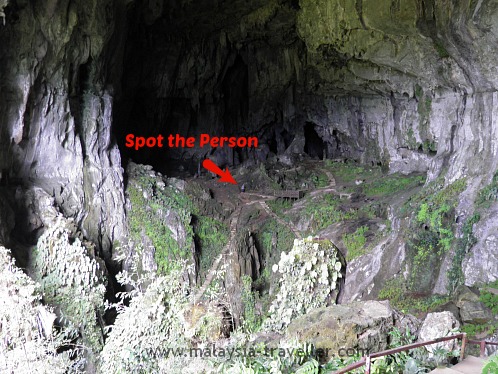 The cave is criss-crossed with concrete footpaths and steps and it is best to stick to the paths for safety and to avoid damaging the fragile eco-system. 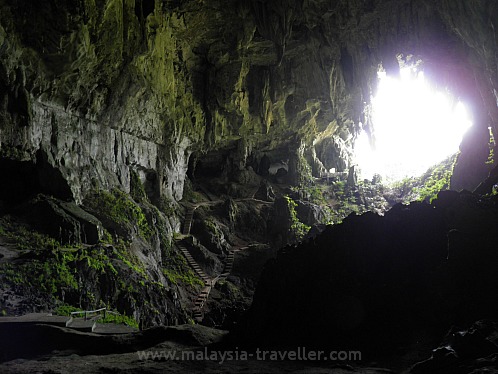 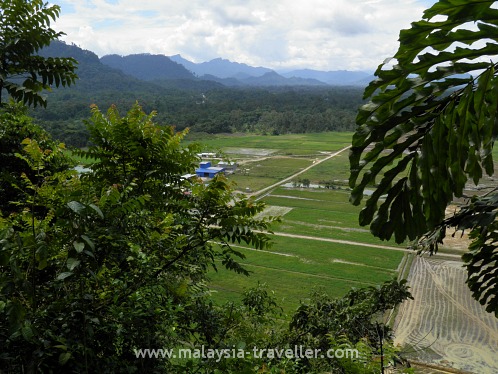 From the opening high up above the cave floor you can get a good view of the surrounding fields and forested hills.

Personally I think they should charge a nominal fee and use the proceeds to maintain the paths and steps which in places are showing signs of disrepair.

How to Get to Fairy Cave

Most tourists arrange a tour from Kuching covering Fairy Caves and Wind Cave. These tours usually last around 4 hours and cost around RM100 per person including lunch.

Since I prefer independent travel, I rented a car (RM140 per day) and drove myself. Direction signage on the outskirts of Kuching is not great but once I found the road to Bau (route 1004) it was fairly straightforward. The approximate location of the cave is marked on the map below.

About 8km after Bau keep your eyes peeled for a small sign to Wind Cave. The turn off for Fairy Caves is a few minutes drive after that.