Durians are the most famous of Malaysian fruits due to their powerful aroma, distinctive taste and custardy texture. The famous 19th century naturalist, Alfred Russel Wallace said ‘to eat durian is a new sensation worth a voyage to the East to experience’.

The fruit is not to everybody's taste. Even in Malaysia, where most people love durian, this stinky king of fruits is banned from hotel rooms and public transport - such is its overpowering and lingering perfume. 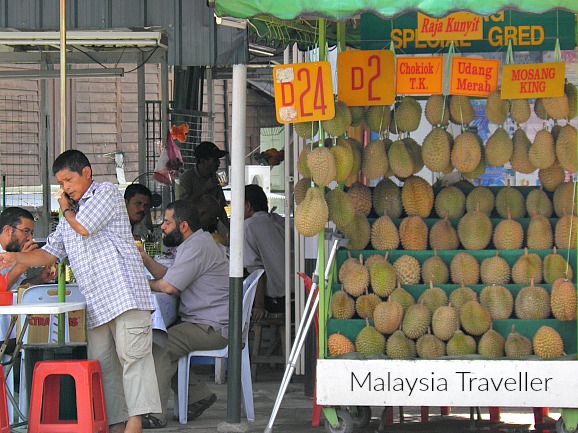 Many roadside vendors have a seating area where customers can consume their purchase on-the-spot and save having to gas out their car.

Indonesians believe the fruit has aphrodisiac qualities and have a saying which translates as “the durian falls and the sarong comes up.”

The most sought after variety is the Musang King, with a creamy texture, smaller seeds (therefore more flesh) and a slightly bitter, fermented aftertaste. They are not cheap and, with China having developed a taste for imported Malaysian durian, the price could become higher still.

Durians in Malaysia are harvested by collecting them from the ground after they have fallen from the tree.

Watchmen or boys are often stationed in small palm thatch shelters to keep an eye on their valuable crop.