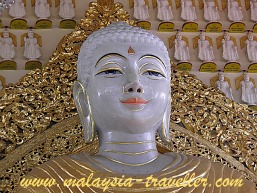 We enjoyed our recent visit to Dhammikarama Burmese Temple which is located on Lorong Burma in George Town, Penang.

The good thing about many Buddhist temples in Malaysia is that it seems they are continually being expanded and upgraded (Buddhism in Malaysia must be prospering). The temples may have started out fairly plain or basic but over the years the decorations become more embellished and the architecture more ornate.

That certainly seems to the case with the Dhammikarama Burmese Buddhist Temple as a new Golden Pagoda Bell Tower was added recently - it was officially opened on 15 May 2011.

The Bell Tower is a four storey structure. The ground and first floors are lined with relief pictures of ancient Buddhist shrines from around the world while the upper two floors contain statues of Buddha, Kuan Yin and various devas and devi all produced by Burmese artists.

We went up to the balcony on the top floor from where there is a good view of the other temple buildings and the pretty gardens. 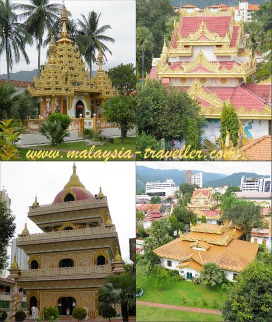 What is the Burmese connection you might wonder? We tend to think of Burma as being a long way away from Malaysia, on the other side of Thailand. That is true but there is a long sliver of Burmese territory which snakes its way down the western coast of the Thai isthmus and the southernmost part of Burma is only about 300 miles from Penang.

Given that the Malay, Thai and Burmese spheres of influence have ebbed and flowed over this whole region throughout history it is not surprising that elements of Burmese culture should have made it as far as Penang. 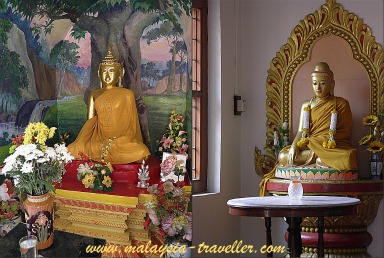 The temple was founded on 1st August 1803 making it one of the earliest Buddhist temples in Penang.

It is an active centre for Buddhist learning and practice and we saw monks having a meal in the dining hall. The grounds also include dormitories for the monks, a Sunday school, library and lecture hall but the top attraction is the main shrine with its giant Buddha statue with face and hands made from white marble. 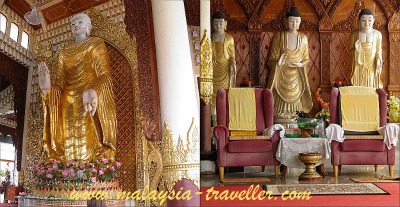 Many worshippers were seated on the floor of this hall gazing upon the peaceful expression of the Buddha's face, praying or meditating.

Outside, my son tried his hand at the wishing pond where people toss coins and try to get them to land in revolving metal bowls marked 'health', 'wealth' and so on. He didn't have much luck but at least the coins all go to good causes.

The entrance to the main temple is guarded by two large statues of a mythical lion-like creature sometimes called a Chinthe or leogryph. These are scaled down versions of similar statues at the Shwedagon Pagoda in Yangon, Burma which I visited a while ago. 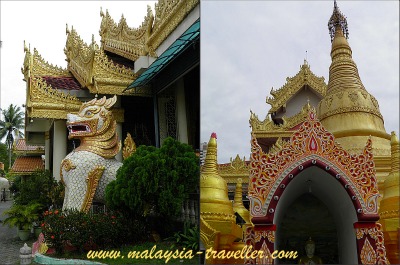 The Dhammikarama Burmese Temple is clearly no match for the Shwedagon Pagoda but the latter is more than 2000 years older. Perhaps after 2000 more years of upgrading and improvements, Dhammikarama will look just as impressive. But for now it is still worth visiting. Entrance is free but donations are most welcome.

If you would like additional information on the temple see their official website which you can find by clicking here.