Dengue fever has been on the rise in Malaysia over the past 40 years.  It is a virus-caused disease spread by the bite of the Aedes Aegypti mosquito and is more prevalent in urban areas.

While dengue fever is rarely fatal, if left untreated it can develop into hemorrhagic fever stage which has a far higher fatality rate.

Symptoms of dengue are summarised in this graphic. 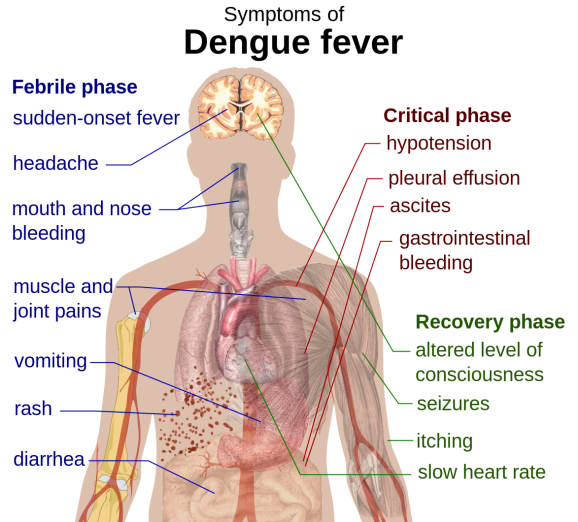 There are no preventative vaccines in use in Malaysia at present and the best way to combat the disease is to empty flower pots and other stagnant water pools near the home where the mosquito likes to lay its eggs. Wear loose fitting, light coloured clothes and apply mosquito repellent on exposed skin.

While on the subject , there is a genus of mosquitoes called Malaya which is found in many tropical areas including Malaysia. It has a hairy bent proboscis and a unique feeding habit. It sticks its proboscis into the mouth of an ant. This makes the ant vomit and the mosquito eats the vomit. Since it does not suck the blood of humans we do not need to worry about it.