Dadah means drugs, the improper use of which is considered as public enemy number one. Malaysia, in common with some of its south-east Asian neighbours, enforces a mandatory death penalty for drug traffickers. This gets attention in the international media whenever a westerner is involved. 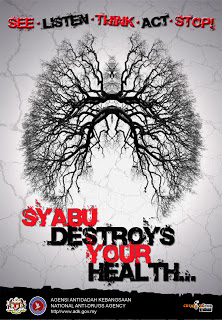 Whether these draconian penalties are an effective deterrent against drug trafficking is unclear but drug usage in Malaysia seems to be moving in the wrong direction since 2012.

Women seem to be much better at resisting the lure of drugs.

2015 Breakdown By Type of Drug

2015 Breakdown of Causes for Starting to Take Drugs

We should choose our friends carefully.

In 1983, the government has taken a new approach in the fight against the drug epidemic in the country. During the year the problem is declared as a threat to national security. Basic philosophy is to create a society free from the threat of drugs. This policy has been declared by the Honourable Tun Dr Mahathir bin Mohamad, former Prime Minister of Malaysia on February 19, 1983 at the launch of Anti-Drug Campaign. Since then, the drug is considered as enemy number one. The main target of drug addiction is the younger generation who are the backbone and promising future. Distribution and spread of drug addiction can threaten socio-economic, spiritual and culture of the masses and further weaken the national resistance and the threat to national security.

In 1985, JKAD has formulated the National drug policy and prevention as the main strategy that includes prevention and early prevention of entry law enforcement, followed by recovery. While manpower development and evaluation of international cooperation and coordination of the support strategy. But this policy was changed to the new strategy by the National Drug Council. Consequently, the policies of drugs was used as a basis for the implementation of strategies for combating the main enemy of DRUGS.

Basis For Consideration In Formulating Policies and National Anti-Drug Strategy

If supply decreases and demand for drugs can be reduced then the drug problem will be eliminated entirely.

Priority list of strategies that have been arranged and approved by the Education and Publicity Prevention, Treatment and Rehabilitation, Law Enforcement law and international cooperation.