Bukit Keluang has some of the best coastal scenery in Malaysia with lovely beaches, a wooden walkway along the cliff edge, sea caves and a 141 meter high hill with a superb view over the South China Sea.

It is located in Terengganu about 6 km south of the town of Kuala Besut which is where travellers catch boats to the Perhentian Islands.

When I went in March 2012 I parked my car in the beach's car park which is at the foot of the hill. There were a couple of food stalls located here together with toilets and other facilities.

I walked onto the main beach which curves around a nice bay lined with casuarina trees. There were some gazebos here for picnics and some concrete chairs and tables under the trees.

The base of the hill was right on the water's edge and there were steps leading up to a wooden walkway built on the rocks above the water line. The walkway clings to the hillside and leads to a couple of sea caves inhabited by bats. At low tide it is possible to walk round to the caves but at high tide, which is what it was during my visit, the walkway is the only safe way to access the caves.

Unfortunately, some sections of the walkway had been washed away by rough seas and heavy storms during the last monsoon season (Oct - Feb) and the walkway was not usable.

This was a disappointment - hopefully it will be repaired soon. 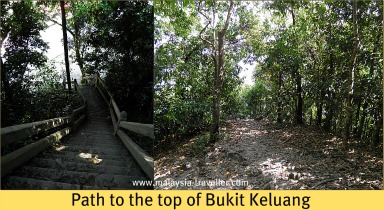 Never mind - I managed to find a steep flight of concrete steps going up the side of the hill and I guessed these led to the top of the hill. (The steps are located opposite the toilets if you want to try this walk.)

The steps ran out after a few minutes climbing but there was a rough path leading up to the summit of this hill.

It was a strenuous and sweaty climb but I reached an opening near the top from where there were great views looking out to sea, which was a beautiful turquoise colour that day. 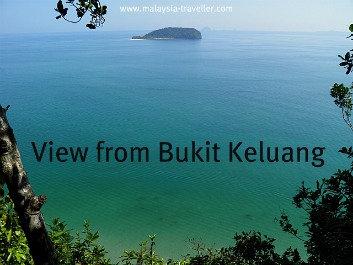 The closest island on this photo must be Pulau Ru which I imagine is uninhabited. From my map I see the island has a 105m high hill on it.

Behind Pulau Ru you can just make out the Perhentian Islands in the background.

The path continues along the ridge for some distance if you want to explore further.

Returning to the car I drove to the far end of the hill where it meets a river, Kuala Keluang.

Here was another clean and secluded beach with no visitors on it apart from a couple of fishermen trying their luck.

There are a few hotels nearby including the Bukit Keluang Beach Resort.

How to Get To Bukit Keluang

The location is marked on the interactive map on my Beaches & Islands page.

If you are driving from the north (Kota Bharu) you will pass Kuala Besut and remain on the coast road. The turn off is shortly after Air Tawar (which is another nice beach).

If you coming from the south (Kuala Terengganu) it is located shortly after Kampung Peng.Teras.