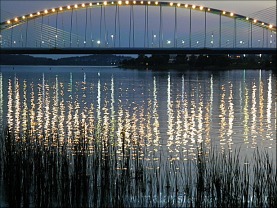 There are some great bridges in Putrajaya and people come from miles around to photograph them.

There is a 650 hectare man-made lake in the heart of Putrajaya and its sprawling tentacles extend far and wide to provide attractive waterfront settings for the many Government ministries and other prominent buildings.

All that water means that bridges had to be built to ensure the free flow of traffic. There are 8 bridges spanning water in the city. These are the best five: 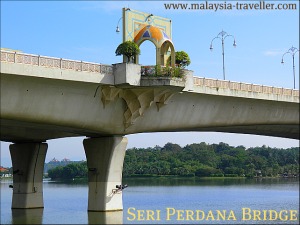 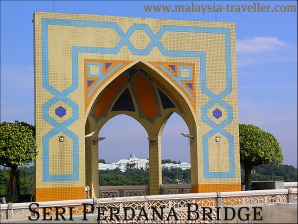 Seri Perdana Bridge is 375m long and connects Precinct 1 with its Royal Palace and Prime Minister's Office to Precinct 8 near the Yacht Club. This is the Bridge that the Prime Minister probably uses most often to drive to work.

It is said to be built in Moorish style and it features eight rest pavilions from where pedestrians can obtain excellent views of some of Putrajaya's most famous landmarks such as Perdana Putra (the PM's Office), Putra Mosque and Seri Perdana, the PM's official residence.

The viewing pavilions are arch shaped and tiled with geometric pattern designs in the Islamic style. 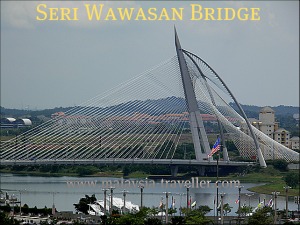 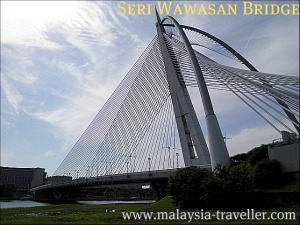 Seri Wawasan Bridge is, in my opinion, the most elegant of the bridges in Putrajaya. Its futuristic design combines cable back stays and standard steel tie backs. Its curvaceous and slender profile is easily visible from many vantage points in the city. At night the bridge is illuminated with changing coloured lights. The bridge is 240m long and the main span is 168m long. There are 102 cables used in its construction. 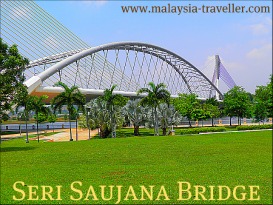 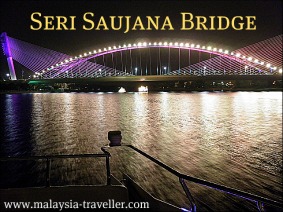 Seri Saujana Bridge is my second favourite of Putrajaya's bridges. It is longer at 300m and is a unique combination of cable stay and steel arch design which seems a kind of belt and braces approach to keeping the bridge aloft. Its taut cables remind me of a giant harp. The bridge has grey and white main stay cables and blue back stays. Again the bridge is colourfully illuminated at night. 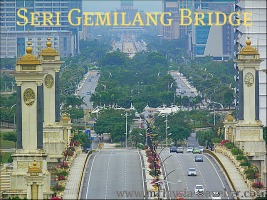 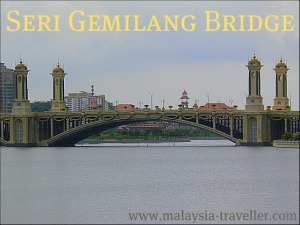 Seri Gemilang Bridge. The long and wide boulevard which runs majestically down the centre of the main island at the heart of Putrajaya is linked to 'the mainland' at one end by Putra Bridge (see below) and at the other end by Seri Gemilang Bridge. In the shadow of the Putrajaya International Convention Centre, Seri Gemilang is a more traditionally designed steel and concrete bridge but with very grand decorative towers, trimmed with marble and gold. It is 240m long with the main span being 120m. 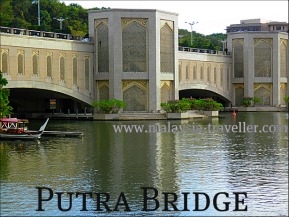 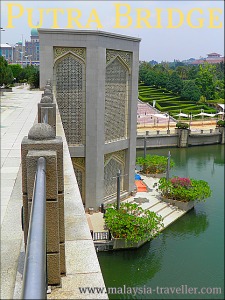 Putra Bridge is the longest of the bridges in Putrajaya at 435m and is a popular spot for wedding photos. It is a two-tier bridge with the upper level being the road and the lower level reserved for the planned monorail system which is currently on hold.

The architecture of the bridge was said to be inspired by the Khaju Bridge in Isfahan, Iran and indeed there is some similarity in the design of the octagonal viewing pavilions. The jetty for Cruise Tasik Putrajaya is at the foot of one of the bridge's eight piers. 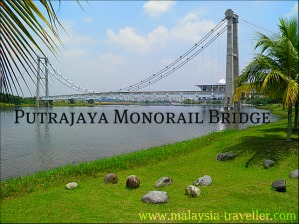 Putrajaya Monorail Bridge. As mentioned, the masterplan for Putrajaya includes a monorail line. The project is currently on hold until further notice but a bridge and some of the tunnelling have already been constructed.

Locations of the Bridges in Putrajaya

The Locations of all these bridges are shown on the map on the Top Putrajaya Attractions page.