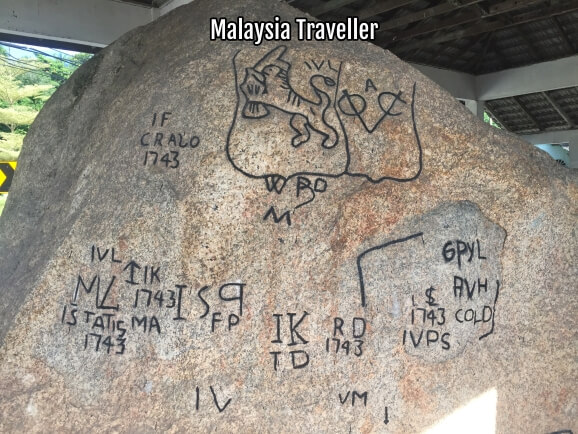 Batu Bersurat Pangkor Island is a large rock at Kampung Teluk Gedung inscribed with graffiti made by Dutch soldiers in the 1700's. These soldiers were based in the Dutch Fort just 100 metres away during the years 1743-1748 and the date 1743 is carved on the rock five times. 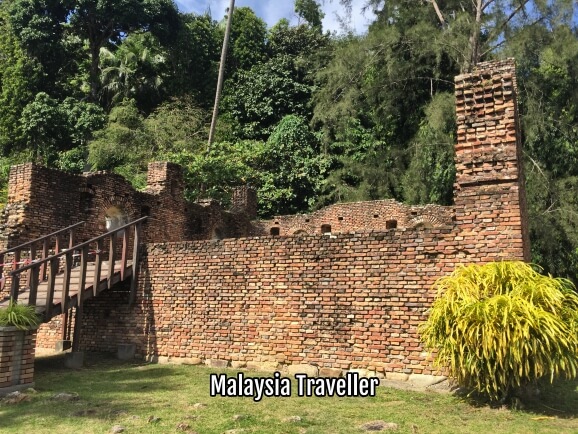 The rock is regarded as a historical monument and a modern roof has been built over the top to protect it from the weather. 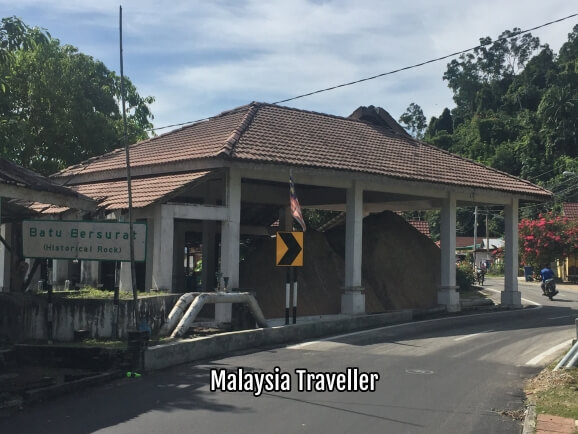 A Rock With A Roof

In English the rock is sometimes called Sacred Rock, Inscribed Rock or Tiger Rock because of the widely held belief that the main drawing depicts a tiger mauling a boy. This has spawned various theories and legends about a tiger which killed the son of a senior Dutch official based in the nearby Dutch Fort just 100 metres away. Well I am sorry but all these apocryphal stories are wrong. 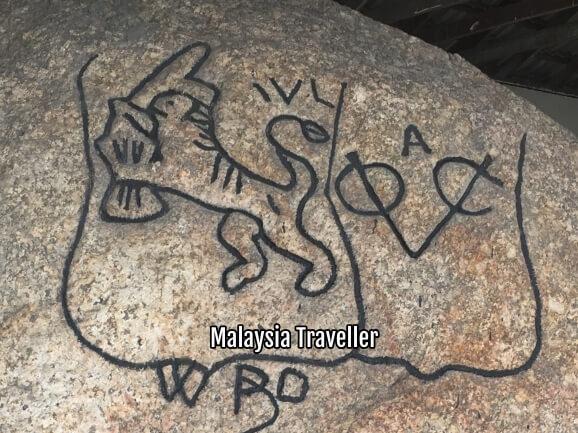 I have only just visited this rock (January 2019) but to me it is clear that this image is not a tiger at all but is in fact the Dutch coat-of-arms that was in use at the time the graffiti was made. 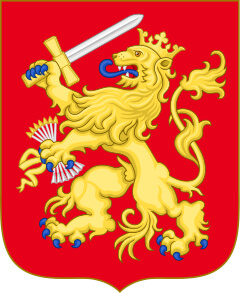 The artist may not have been too skilled but the animal is a lion (see the tail - tiger's tails do not end in a hairy tuft) and it is carrying a quiver of arrows and a sword, not a young boy. Even the line around the drawing is the same shape as that on the coat-of-arms' red shield. 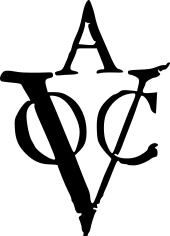 The VOC symbol to the right of the lion carving is the symbol of the Dutch East India Company (Vereenigde Oostindische Compagnie) and the letter A probably represents the Amsterdam Chamber of that company. 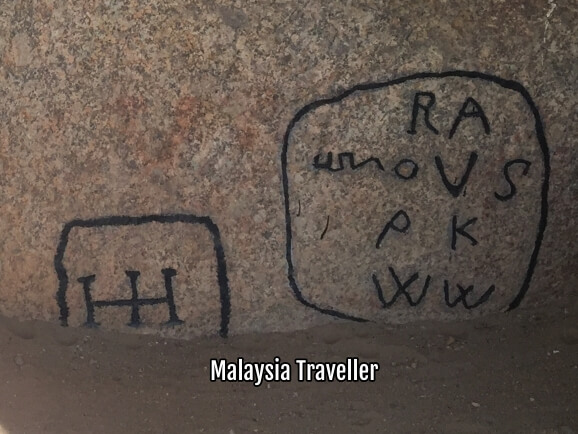 I don't know what the other initials and symbols mean.  Perhaps they are the initials of the soldiers or of their sweethearts back home. 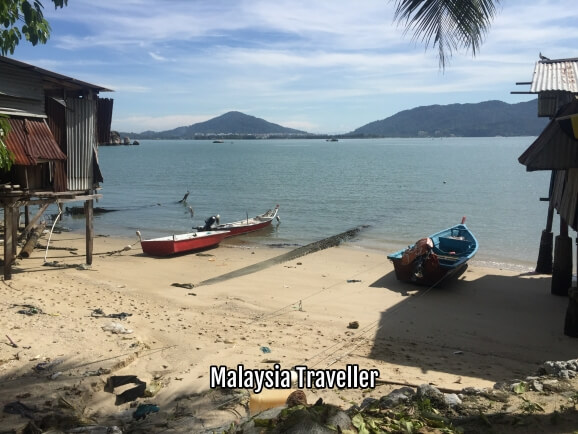 When the soldiers had had enough of graffiti they could enjoy the tranquil waters of Teluk Gedung.

P.S. Since writing the above I have seen this extract from an Article in the Journal of the Straits Branch of the Royal Asiatic Society called 'Outline of the History of the Dindings from the 17th Century to the Present Time' by E.M. Merewether published in 1891. This article confirms my argument. 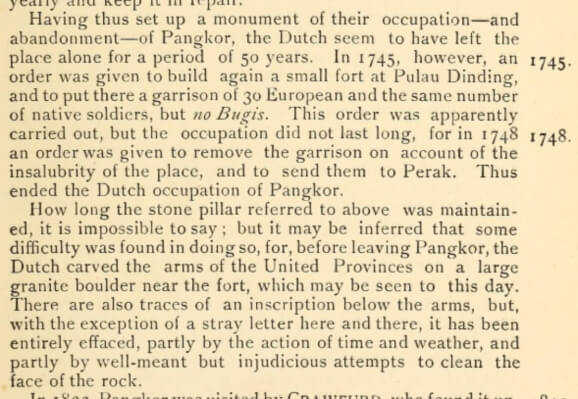 Now that we know, I propose that the name of the rock in English should change to 'Dutch Lion Rock'.

How To Get to Batu Bersurat Pangkor Island

From Pangkor Island Jetty it is easy to hire one of the ubiquitous pink minivan taxis that you find on Pangkor, or you can hire a motorbike. I walked from the jetty and it took about 20 minutes. There is no proper pavement or sidewalk so you have to walk on the road most of the way but traffic is light and consists mostly of motorbikes so it is not too dangerous.

On the way you will pass two other rocks of interest: 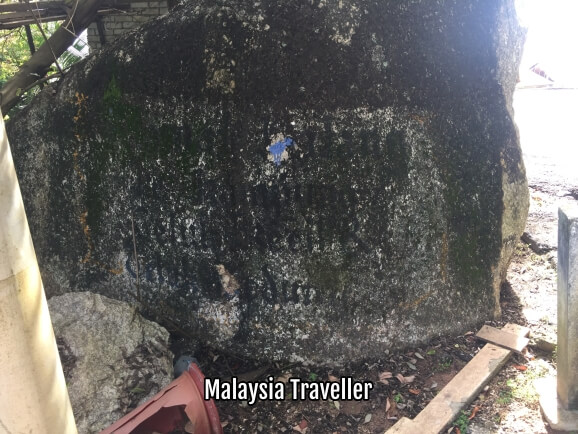 This rock bears some inscription in a gothic-style font. Probably not very old but it would be interesting to know what it says. 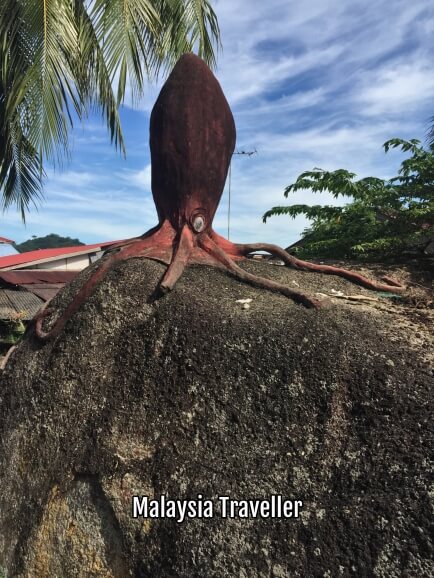 The exact location of 'Dutch Lion Rock' is marked on this map: