During Chinese New Year in Malaysia, it is the custom for married adults to present ang pow (red packets containing an auspicious number of crisp new banknotes) to children, teenagers and unmarried adults. In Cantonese these red packets are known as lai see. Hung bao is another term.

The red envelopes are decorated with lucky symbols and characters wishing good fortune, long life and good health. They may also bear images of the Chinese zodiac animal for the relevant year. In Chinese culture, red is regarded as a lucky colour bringing protection and prosperity.

Ang Pow Should Never Be White

White should never be used for ang pow packets since white is the colour of pak kum envelopes containing cash which are presented to bereaved families at funerals to help pay for funeral expenses.

The amount of money given at Chinese New Year depends on various circumstances, most importantly what the giver can afford.  Some people like to give an amount ending with eight such as RM8, RM88 or RM188 as the word eight sounds like fortune in Chinese. Even numbers are considered more auspicious as odd numbers denote loneliness, although nine is popular as it sounds similar to longevity in Chinese.

Banks have to ensure they have sufficient supplies of brand new banknotes in the run up to Chinese New Year, especially the lower denomination notes. There is usually a spike in Malaysia’s money supply at this time of year. Banks will also distribute stocks of empty red packets to their customers at this time of year.

Ang pows are also distributed at weddings, birthdays and other importanat events. If you are invited to a Chinese wedding you need to consider how much money to put inside the envelope. What is the etiquette? It will depend on how well you know the married couple, your financial standing, whether you have come alone or with your family, how much the couple have spent on the wedding meal that you are eating and so on. It is not supposed to cover your full share of the wedding costs but, on the other hand,it should be too stingy. Giving more than you can afford would seem like showing off.

One other piece of trivia. It is not only the Chinese who give out cash-filled envelopes on festive occasions. Other cultures in Malaysia have adopted the custom too. Malays give green envelopes decorated with Islamic motifs during Hari Raya, while Indians give out their own version at Deepavali. 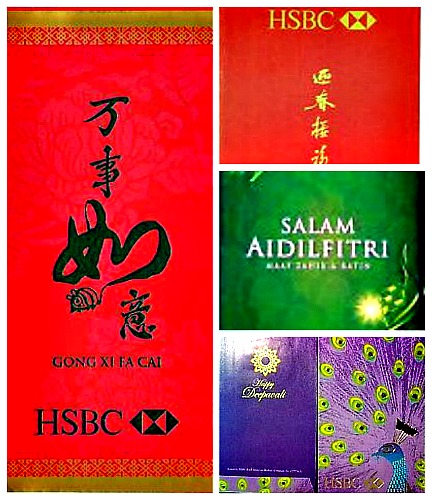