Ah Long is the Cantonese term used in Malaysia to refer to money lenders, mostly illegal but sometimes licensed. People desperate for money often resort to these unsavoury characters, loan sharks who charge criminally high interest rates and use intimidation, threats of violence and other despicable tactics to enforce repayment.

Interest rates can reach 10% per week or more. To add insult to injury these crooks plaster their advertising posters over road signs, lampposts and traffic signals. 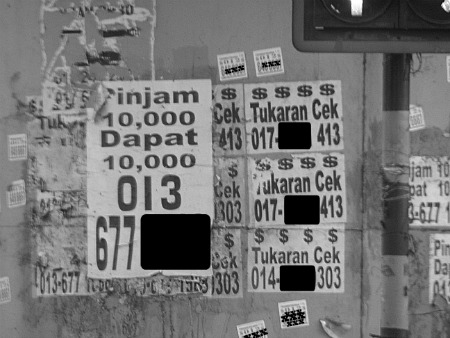 Instead of resorting to money lenders, those in financial difficulties should seek help from people like AKPK, the Credit Counselling and Debt Management Agency.

Talking of exorbitant interest rates, avoid borrowing on credit cards too. My bank (one of the world's biggest) charges an obscene annualised percentage rate (APR) of around 37% on credit card outstandings. Did you know that if you had an outstanding balance of MYR20,000 and paid the bank only the minimum payment due each month it would take you 26 years to pay off the debt and you would end up paying the bank MYR70,510 in total. And that's not including any penalty charges for late payment which is where the banks really resemble Ah Longs!