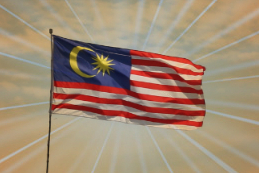 Following the dreadful race riots which occurred in May 1969, the Malaysian Government felt that the adoption of a set of National Principles would help to foster national unity and stability and to promote racial harmony in what was still a relatively newly independent country.

The following statement of national philosophy was declared by royal proclamation on National Day, 31st August 1970, the 13th anniversary of the Independence of Malaysia:

Whereby Our Country, Malaysia nurtures the ambitions of:

Now therefore, we, the people of Malaysia, pledge to concentrate our energy and efforts to achieve these ambitions based on the following principles:

The pledge of National Principles is promoted in schools by weekly recitals and read out at official functions such as the State Opening of Parliament.

Malaysia is not alone in having such national principles. Neighbouring Singapore has its National Pledge while Indonesia embodies its founding principles in Pancasila, the official state political philosophy.